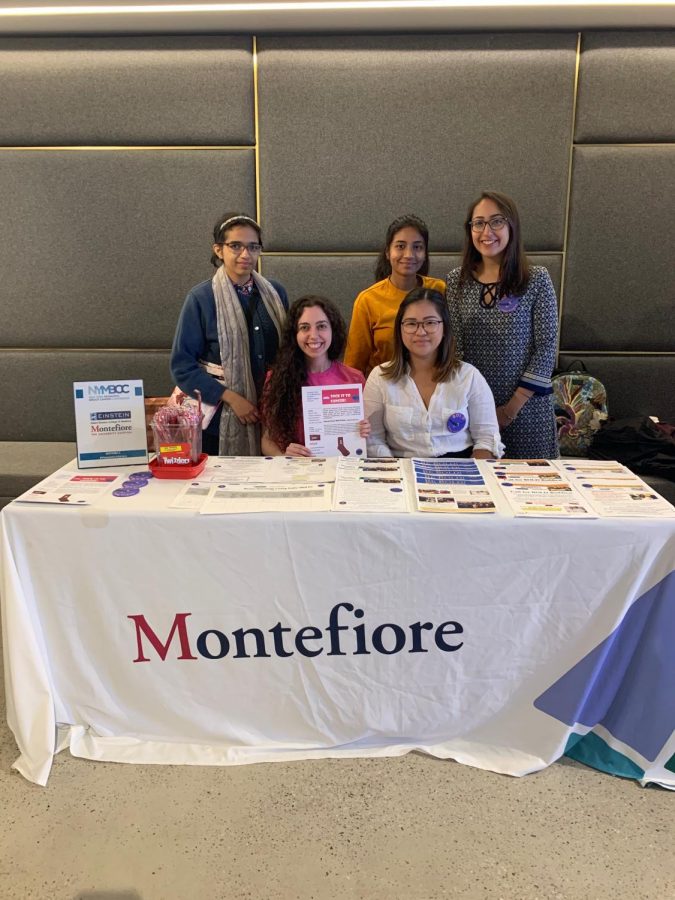 Bronx Oncology Living Daily (BOLD), a psychosocial program at Montefiore for cancer patients in the Bronx, is hosting various events in October in honor of breast cancer awareness month.

The BOLD program is partnered with multiple universities around the city, including Hunter College, and just began a chapter at Fordham. So far, the club has volunteered for programs that BOLD is hosting, especially this month for breast cancer awareness.

“We’ve done tabling at a few events so far,” said BOLD outreach and social media coordinator Ailsa Ryan, FCRH ’20. “Our first one was for men with breast cancer and their families where we listened to a panel of doctors and survivors of breast cancer.”

She said that she and other members learned about men and breast cancer as well as tabling and providing information and resources to attendees. They got to hear Michael Singer, an advocate for awareness of breast cancer in men, speak about the disease and not gendering it.

“It was really interesting to hear his story and see how he went through the whole thing and how he could provide support and information to other people that were either impacted directly or their family members are impacted,” said Ryan.

The club also tabled at the Susan G. Komen Metastatic Breast Cancer national conference the weekend of Oct. 5 and 6 in Manhattan. BOLD president, Gianna Antinori, FCRH ’20, said there were people there from across the nation She said they tabled to bring awareness to people in the city.

BOLD partnered with a designer named Matt Gresia, a 22-year-old from the Bronx and founder of Canswer Sock Co., to design a sock with “BOLD” on it. BOLD held an event called “Sock It to Cancer” to kick off breast cancer awareness month, where they introduced the project.

Antinori said 100% of the proceeds will go to the BOLD program to help fund its programs. She said the socks are currently sold out online.

“We went to that last night and they just talked about what a great opportunity this is and how willing he was, because he’s from the Bronx, to create a BOLD sock and give all of the proceeds to the BOLD program,” said Antinori.

BOLD has programs planned for the rest of October as well for breast cancer awareness. On Thursday, Oct. 17, from 11 a.m. to 1 p.m. at its Einstein campus, BOLD is hosting a special symposium in honor of breast cancer awareness called What Matters Most. The event will talk about advising to help people with the disease to consider their treatment options, advances in treatment and screening and psychosocial and integrative oncology.

Also coming up is BOLD Beauty Day on Oct. 22 from 12 p.m. to 3 p.m. in collaboration with Cle’ de Peau Beaute. The event will pamper mothers and daughters in recognition of breast cancer awareness.

Fordham’s chapter of BOLD will be tabling at the Making Strides Against Breast Cancer event sponsored by the American Cancer Society. Antinori said the larger organization will also be hosting a Halloween party at Montefiore. She said Fordham’s club members will be helping out and interacting with the patients as well as getting to know the community. BOLD at Fordham also plans to have its own Halloween party to make care packages for cancer patients and get to know their members.

The BOLD program originally grew out of a psychoassesment asking what patients needed outside of treatment and what would help them cope better, said Alyson Moadel-Robblee Ph.D., a health psychologist with an interest in improving quality of life after cancer for patients and family members. She has worked at Albert Einstein College of Medicine for 21 years.

Patients said they wanted more mind-body therapies, such as creative arts, nutrition and fitness, according to Moadel-Robblee. She said in 2008, she and her team took the data and started to develop the program. The goal of the program was to provide services for free and make them accessible in English and Spanish, since they worked for an underserved community in the Bronx. She said the program started out being run by volunteers and still heavily relies on volunteers.

Moadel-Robblee said patients requested people to talk to who have been through cancer themselves. They formed the BOLD buddies program, which is compose of cancer survivor volunteers from the Bronx who want to give back and help navigate patients through the experience.

“The buddy program has been invaluable for helping them get through with a built in family,” said Moadel-Robblee.

They also have a BOLD brothers and sisters program for teens with a caregiver with cancer. People who have had similar experiences help these teens apply to school or stay on a good path, she said.

BOLD was started at Fordham because the larger program had interns from Fordham last semester. According to Antinori, the members wanted to get BOLD started at

Fordham and get more people involved in the program because it relies heavily on volunteers.

“She was getting in the process of getting it approved and she graduated, so I was kind of handed the BOLD club, and they were like, ‘Hey, we would love it if you could help out,’” said Antinori. “I originally wanted to intern. It was just too much of a commitment, so I was like, ‘Yeah, I would love to help bring this to Fordham and get people connected to the BOLD program.’”

She said Fordham’s club helps the larger program by providing volunteers at its events and tabling to try and spread the word. It is also looking for people who have gone through cancer with their family, and would love to be paired up with someone who is currently struggling, for the brothers and sisters program.

Antinori and Ryan said they both encourage people to get involved, and, for more information, email them at [email protected]