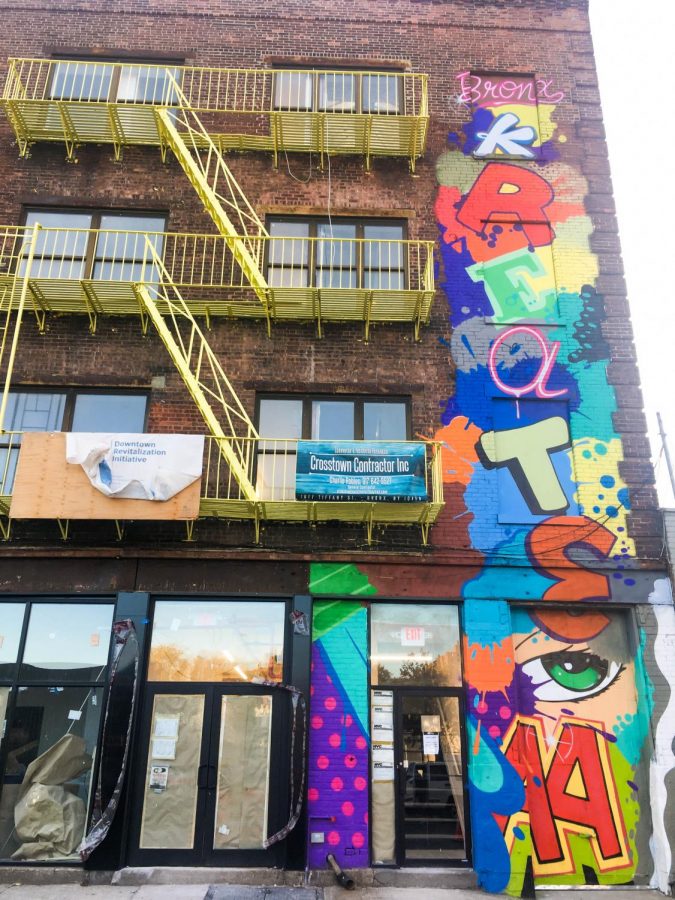 Located at 15 Canal Pl. in the South Bronx, there is a colorful, street art-inspired mural on the front of a four story brick building. Crash, a Bronx street artist, created the piece and serves as the curator for The Bronx Kreate Hub’s gallery. The Hub opened on Nov. 1 after two years of preparation.

The building is a space for local artists to rent out studio space for their work. The first floor is in the process of renovating for café and a gallery. The café will be open to the public, and locals are welcome to come, grab something to eat and work in the space. According to Daniel Freeman, property manager, the gallery is an opportunity to showcase local artists, in-house artists and global artists.

According to The Hub’s website, it will accept all kinds of art, including but not limited to works of animation, ceramics, graphic design, filmography, sound engineering, fashion design and writing.

They will be bringing in Wallworks, an established local gallery in the community, to display work in the Kreate Hub space. Freeman said Wallworks has gained a reputation in the community as being at the forefront of certain artistic movements.

“By bringing them in house we have their curating experience and they’re going to put on monthly shows … it’ll be an opportunity for the community to discover some new art,” said Freeman.

The following three floors have studio spaces of various sizes. There is a variety of shared and private spaces for artists to rent for a monthly fee. There are also conference rooms on each floor.

Kathryn Murphy, FCRH ’21, visited the space and said she has never seen a space like this before.

“Which is why I think it is so necessary,” she said. “Shared work spaces are on the upward trend for office jobs, but before this site, I did not think it was possible for artists to have the same opportunity to simply be around other artists that they are not directly working with.”

Freeman said the idea for the space came after he and his colleagues met the Bronx borough president Ruben Diaz Jr. a number of years ago. He said some of their colleagues had experience doing something similar in another borough and the question arose: Why does the Bronx not have a destination for artists and makers at an affordable price?

“It’s been a big undertaking and we are very excited to get opened,” said Freeman. “We’ve obviously captured the attention of the borough, which is wonderful, and the fact that the gallery and cafe is open to the public is a great thing because all artists want to be seen.”

Bronx Kreate Hub is part of Gov. Cuomo’s Downtown Revitalization Initiative, which is a $10 million initiative to make strategic investments in the Bronx. Freeman said its support has been indispensable.

“Without their support, this project would never have seen the light of day,” he said. “They were able to provide the necessary financial support, and they were instrumental in helping us find the perfect space to accommodate our needs.”

Freeman said that the Hub’s perfect location is able to accommodate about 100 different artists from a wide variety of media including painters, photographers and fashion designers.

“There’s really very few limits to what people can do here,” he said. “I think that people who find themselves attracted to this particular space are people who don’t fit into a traditional WeWork co-working space. There are a number of different options for price points for their needs.”
Freeman said that the artists have begun moving in, and they have about 35 so far.

“Being in a building with a hundred creatives, they’ll have the opportunity to network, to collaborate, to inspire each other, so that’s a wonderful thing,” he said

The Hub strives to continue to anticipate the needs of its artists as they grow, said Freeman. According to Freeman, it said wants to give artists an opportunity to create and promote their art. The hope is to attract the attention of the Bronx community and art community at large, he said.

“We are thrilled to be a part of this incredible borough,” said Freeman. “It has such a rich cultural history. This opportunity can only help cement its cultural significance for decades to come.”

Murphy said she thinks that the Bronx has always been an artistic hub, but can be neglected because there are not a lot of defined spaces for artists to work in.

“Spaces like Bronx Kreate Hub is exactly what the community needs to finally be recognized for all of the talent it holds and providing artists of every medium with the space and tools that they need to succeed,” she said.

Freeman said once the space has been up and running for a while, the Hub is interested in community outreach initiatives. He said the Hub members have discussed creating a mentorship program where certain local students can be paired with artists in a field that is of interest to them. Freeman said this is a way for students to have an opportunity to see someone following their passions and making a career out of it.

“To have a destination in the borough for these remarkable young artists is to be able to work in the borough and stay in the borough is a good thing for everybody,” said Freeman. “We are excited about having this place full of life and color.”