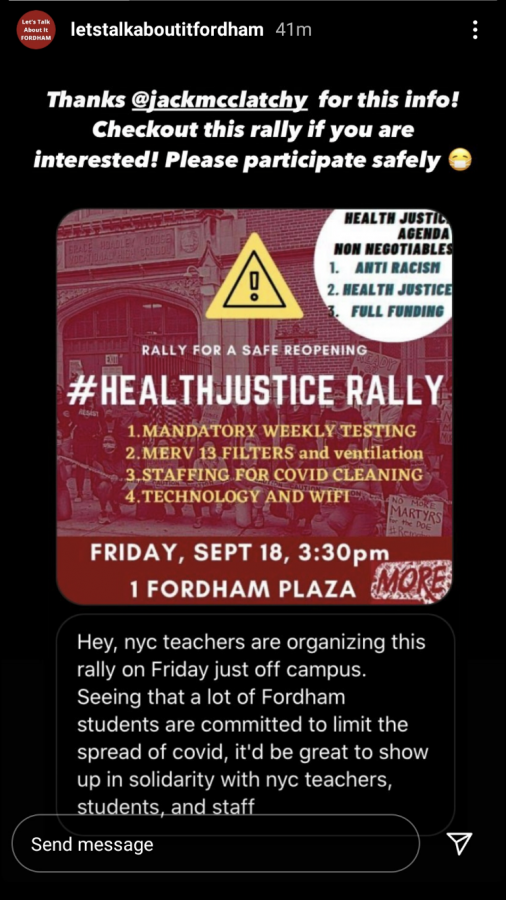 Fordham students showed up at the rally in support of teachers and community members. (Courtesy of Lets Talk About It Fordham)

Teachers, parents and students alike gathered at Fordham Plaza, just outside the university’s gates, on Sept. 18. to demand a fully remote school year for the New York City public school system. Rally attendees cited New York’s Department of Education’s (DOE) inability to propose a plan that teachers feel prioritizes the safety of both students and teachers as a major problem for reopening.

Elon, the event’s MC and a high school English Arts teacher, said he attended the rally for what he describes as “18 million reasons,” but he said the biggest reason is because opening the school will put people at risk.

In the two-hour-long rally, a variety of guest speakers, from candidates for public office to parents afraid for their children’s future, voiced their opinions about the DOE’s plan to reopen public grade schools for the coming school year. Elon kicked the rally off with a short introduction, ending his initial speech with the following sentiment:

“We’re here to elevate all of our voices.”

Many of the speakers’ criticisms of the DOE stemmed from a lack of proper funding. The demands that the rally attendees made, as spoken by Elon were all in response to this lack of funding.

“We demand mandatory weekly testing for all school staff,” he said. “We demand clean filters and ventilation systems where there are none. We demand additional staffing and hazard pay for COVID cleaning, and we demand ending the digital divide and providing free sufficient technological devices and Wi-Fi for all families. DeBlasio claims he cares about equity. Give the kids a computer!”

These demands were then repeated in Spanish.

Bringing the children onto their school’s campus, the protesters said, opens up many other problems. One of them, they say, lies in many of the schools’ outdated infrastructure. Inadequate ventilation and sanitation facilities are also being called out as problematic for any safe reopening attempt. These problems, as emphasized by the event’s speakers, have long existed before the coronavirus pandemic. The pandemic has only exacerbated issues caused by severe inequality.

“We shouldn’t have to beg for the same rights and privileges that every other part of this city gets … we’re always having to beg to be seen as complete humans here in the Bronx,” said Amanda Septimo, the Democratic nominee for New York State Assembly’s 84th district. Of the 62 New York counties, the Bronx ranks dead last in funding.

“We have a tale of two Bronxes,” another speaker, Shanequa Charles, said. “And the tale of two Bronxes says that the children in Riverdale get what they need and deserve and that our children don’t.” Charles is a resident of the Bronx’s Fordham community and is a passionately concerned parent acting as a community organizer.

Many of the crowd’s chants reflected this sentiment: “We need money for education, don’t have no soap or ventilation.” Teachers and parents have been fighting for years to get the Bronx properly funded, noted a speaker named Rivera. He showed up to the event with his two elementary school-aged children in hand and said he was a concerned parent.

In a call and response chant, the speakers called, “Show me what community looks like,” to which the crowd around responded, “This is what community looks like.” Another chant supported the strength of the community as the crowd joined together to chant, “The people united will never be defeated.” This chant was repeated in variations, with the word “people” replaced by “students,” “parents” and “teachers” to underline the power of unity.

The speakers at the rally reminded the crowd of the thousands that died in the early stages of the pandemic before positivity rates became more controlled.

Many speakers focused their speech on strengthening community relations in order to provide strength to their voices.

“Together, we have nothing to lose but our chains,” Shaniqua Charles said.