In Season of Uncertainty, Women’s Basketball Looks to Get Back on Top in the Atlantic 10 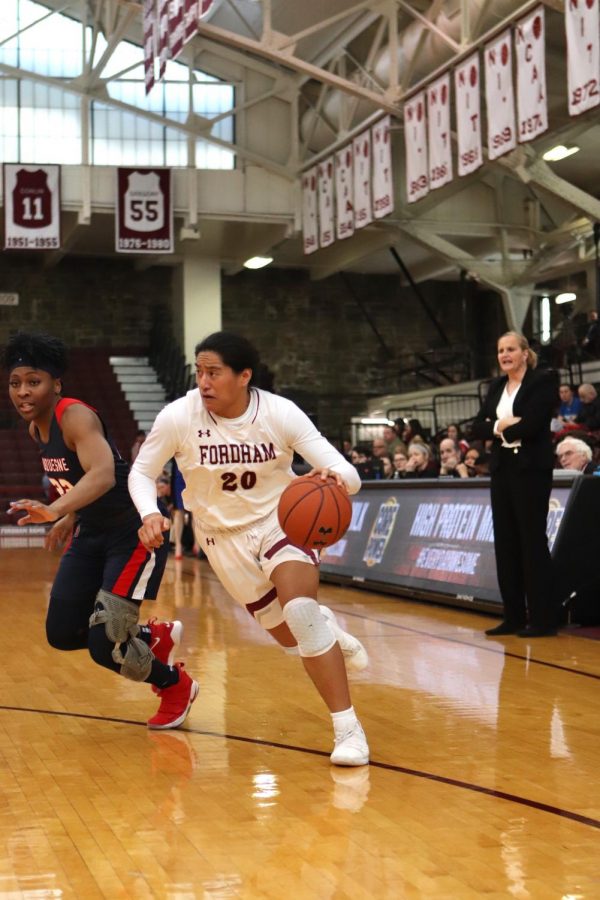 Kendell Heremaia (above) will be critical to the Fordham women’s basketball team’s hopes of winning the Atlantic 10 this season. (Mackenzie Cranna/The Fordham Ram)

The Fordham women’s basketball team enters the 2020-21 season, which has been delayed by two weeks, with unfinished business after the way last season ended. The Rams led their A-10 semifinal game by as many as 17 points in the second half before Virginia Commonwealth University came back to win the game. Fordham’s consolation would have come in the WNIT, but that tournament and all other NCAA competitions were soon canceled on March 12 due to the escalating coronavirus pandemic.

Needless to say, a lot has happened since Fordham’s last game on March 7. But Fordham’s task of winning a conference title remains unchanged, and the team is ready to get back on the court.

“It’s probably more of getting the bad taste out of our mouth of not finishing off the VCU game than it is not playing in the NIT,” Fordham coach Stephanie Gaitley said. “Of just realizing that was an opportunity that slipped away, and how can we learn from that, and how can we be prepared to not let that happen again?”

The Rams return next week with most of their core intact. Senior guard Kendell Heremaia returns after blossoming into a do-it-all third-team all-conference player, having averaged nearly 12 points and eight rebounds per game last season. Sophomore guard Anna DeWolfe, the team’s leading returning scorer, is fresh off being named to the Atlantic 10’s all-rookie team. Junior forward Kaitlyn Downey will also play a pivotal role, having started all but one game last season while providing shooting and inside presence offensively and versatility defensively. Sophomore guard Sarah Karpell returns after showcasing defensive prowess in her freshman year, and junior forward Meg Jonassen, who specializes in offensive rebounding, figures to play a key role off the bench.

However, there is one omission in the players returning to Rose Hill this year. Bryson Cavanaugh, who came out last month as a transgender man, will not be with the team this season. The defending Atlantic 10 Player of the Year will leave a large void in both spirit and production, and the team faces the difficulty of replacing his output in the aggregate, which will not be an easy task.

“You can’t really spend a lot of time on it because you can’t change it,” Gaitley said about missing her team’s best player from a season ago. Gaitley also said that “different kids are gonna step up” when it comes to compensating for Cavanaugh’s absence.

DeWolfe spent her offseason gaining strength, something she feels could help her overall performance this offseason. When the season stopped in mid-March, she took advantage of her home gym to lift during the week, going to Zoom workout sessions with one of the team’s strength and conditioning coaches, Josh Greer.

In addition to these improvements, DeWolfe also became a team captain. She, along with Downey and senior guard Katie McLoughlin, will be the team’s three captains heading into this season. McLoughlin said that this honor, which would be special in any season, carries added weight with the uncertainty that surrounds the sport this year.

“With so much uncertainty surrounding this year, I want to be a solid foundation for the entire team and take everything I have learned from great leaders before me and be able to do that for this team,” she said. “I have such high hopes for this team and think we are capable of accomplishing amazing things, so being able to help lead us to those successes is a huge responsibility that I hold with high regard.”

While DeWolfe focused on the physical aspect of her game, Downey honed in on the mental side, spending the offseason listening to podcasts about mental strength and studying game film from last season.

“I just wanted to reflect back, because a lot of time we forget what it looks like on the court when we’re playing, and then you watch film and you’re like, ‘wow, I could’ve done that, that and that,” Downey said. She also said she watched some of the NBA Finals when she got back to campus this fall to learn from those games as well.

In addition to the players coming back from last year’s team, Fordham will also add five freshmen to the fold this season. Gaitley said she was particularly impressed with forward Maranda Nyborg, a 6’3″ freshman from Bethel, Connecticut. Gaitley also said she could also see guard Matilda Flood from Bathurst, Australia and Riley DeRubbo from Washington, Pennsylvania as players who could also contribute right away.

However, the freshmen have had to adjust, and Gaitley and her staff are trying to get them up to speed as quickly as possible. Without any exhibition or preseason games before the season opener against Stony Brook next week, this is a difficult task.

But despite these difficulties, this is a season unlike any other, and the team has a vested interest in making it to the finish line.

“We just obviously want to play the season and get a chance to finish it, and not just start it,” DeWolfe said.

McLoughlin added that adapting and adjusting to uncertainty would be the biggest challenge facing the Rams this season.

“Anything can change at any given point, and we have seen that countless times already this season, so we will have to remain focused on our goals,” she said. “This takes always being mentally and physically ready which can be very difficult at times, but so far we have proven to persevere through uncertainty already.”

“You’re expecting to play a team the next day, and all of a sudden, it gets taken away just like that,” Downey said. “So just understanding that there’s going to be a lot of errors in this season and just being ready to take the punches and keep moving on, because we know at the end of the day, we want to win an A-10 championship, and it’s going to take just moving through all those punches, winning the games that we have available to us and just moving forward.”