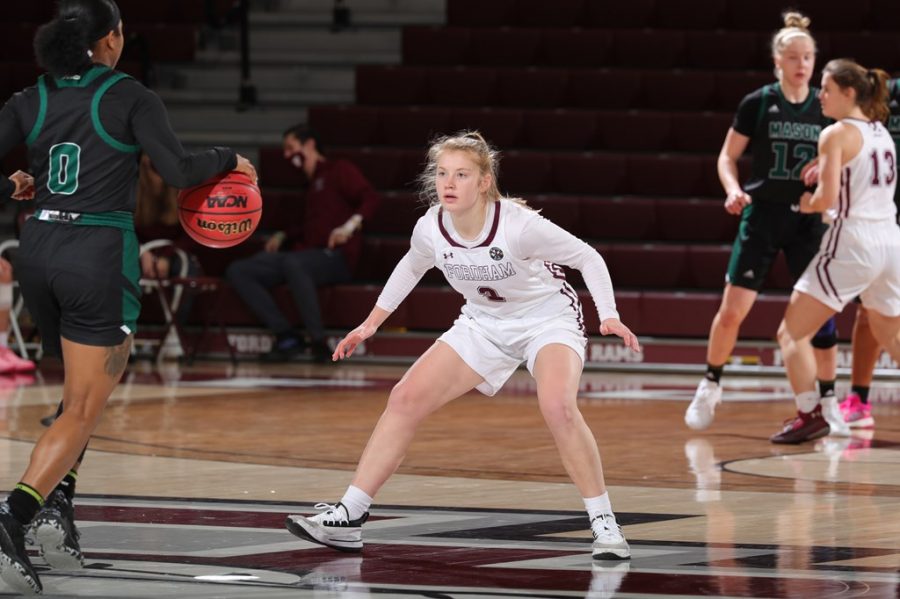 Anna DeWolfe (above) has continued her hot scoring streak into Fordham's first road trip of the season. (Courtesy of Fordham Athletics)

First, Fordham traveled to Rhode Island for a battle of the Rams on Friday. Fordham jumped out to a 16-point halftime lead behind sophomore guard Anna DeWolfe, who scored 17 points in the first 20 minutes. DeWolfe remains the conference’s leading scorer, averaging 22 points per game through the Rams’ first nine contests. Fordham’s first-half lead sustained them through the second half, as they were able to hold on for a 62-54 victory, which moved them to 3-1 early in the Atlantic 10 season.

One of the biggest stories for Fordham in Friday’s game was the Rams’ shooting from three-point range. Fordham — which has attempted the fourth-most threes in the Atlantic 10 and converted at the highest rate in the conference — made 11 of its 21 attempts from downtown on Friday. An offense that is contingent upon taking and making open shots thrived with plenty of open looks on Friday.

That same offense, which made more than half of its three-point attempts just two days prior, struggled mightily in the second half against UMass.

At first glance, Fordham’s offensive numbers don’t look much different from Friday to Sunday. The Rams made one fewer three-pointer and attempted one more; the team also earned 11 more offensive rebounds and took 18 more shots overall. But a deeper look at Sunday’s game reveals many other facets of the game that went very wrong for Fordham.

The biggest issue, by far, was foul trouble. Heremaia earned her fourth foul with four minutes to play in the third quarter, and shortly after re-entering in the fourth quarter, Heremaia fouled out with three minutes to go. Downey also found herself in foul trouble all game long, and she fouled out with just over a minute left. In part because of this foul trouble, both players didn’t get to play as much as they would have liked. Downey played 28 minutes on Sunday after playing 37 minutes and 34 minutes in the previous two games. Heremaia only got to play for 18 minutes as she racked up her fouls.

In addition to the foul situation, a third-quarter slump ultimately doomed the Rams on Sunday. Fordham shot just 2-17 from the field in the third quarter, and after holding a seven-point lead at the half, brought a two-point deficit into the fourth quarter.

UMass senior forward Sam Breen took over in the second half, scoring 17 of her 19 points and giving the Fordham defense trouble. While Jonassen performed admirably defending Breen, the senior was very tough to stop in the post, particularly with turnaround jumpers. Breen’s 19 points led a UMass team that is quickly emerging as a legitimate contender in the Atlantic 10.

With Sunday’s defeat, Fordham falls to 6-3 on the season and 3-2 in A-10 play. Next up is a visit to Dayton on Saturday to take on the defending conference champions. Fordham handed Dayton its only conference loss last season.

The Rams were also scheduled to visit Saint Louis on Thursday night. That game has been called off due to COVID-19 issues in the Saint Louis program.