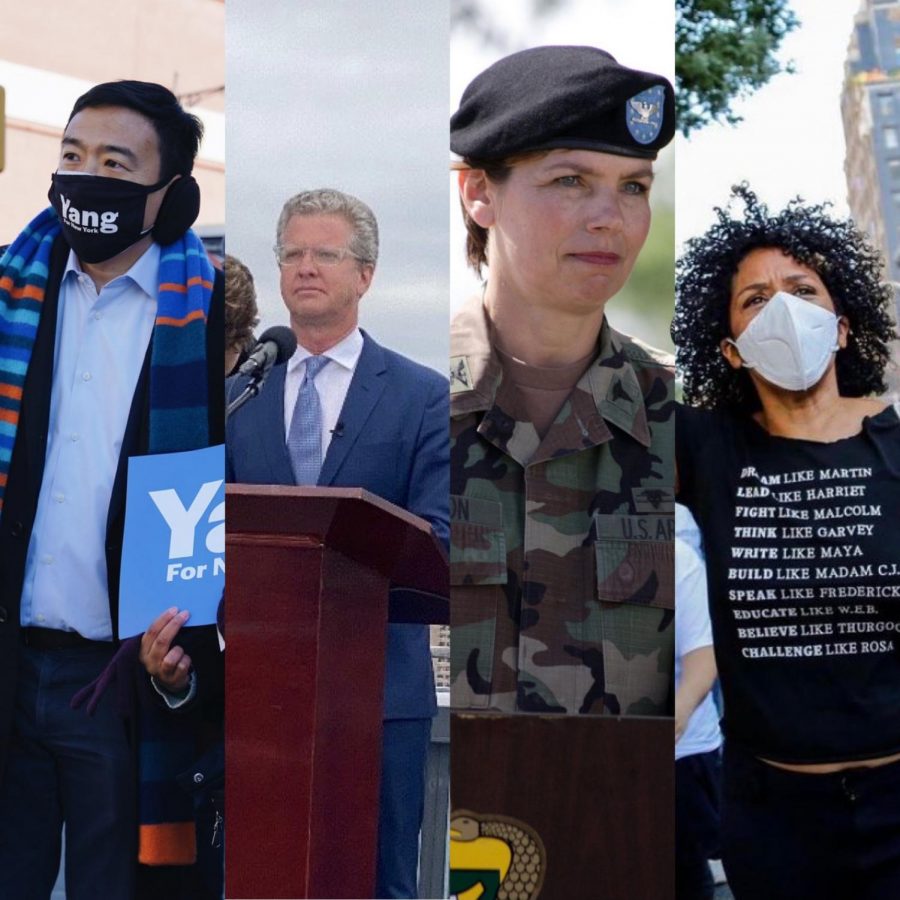 On Nov. 2, 2021, residents of New York City will elect the next mayor of the country’s most populous city. The mayoral race is boasting a strong list of candidates with rich political experience. The current roster for the upcoming Democratic primary contains candidates with decades of New York public service experience, from Eric Adams to Andrew Yang, who recently gained the public spotlight as a prominent Democratic candidate during the 2020 presidential election.

It can be challenging to keep track of all currently-declared candidates for the mayoral race this early in the election cycle (primaries won’t be held until June 22, 2021). The Fordham Ram has compiled a list of the ten highest-profile candidates to provide insight into the platforms and personalities of the biggest players in the race.

Eric Adams has a long history as a public servant in the city, first as a member of the New York Police Department and now as the Borough President of Brooklyn. A Republican-turned-Democrat, he was elected to his current post with 90.8% of the vote and has focused on community outreach in his home borough. In his bid for mayor, Adams established what he calls “100+ Steps for NYC” — effectively his political agenda — which includes working to dissolve tensions between communities and police, creating “tax-free Tuesdays,” and moving to a full-year school year. Adams has been caught in a number of controversies since moving into the mayoral spotlight, most notably for hosting an in-person campaign event during the COVID–19 pandemic.

Shaun Donovan is best known for serving as the Secretary of Housing and Urban Development under President Barack Obama. His platform focuses on issues of education, climate, housing, health and aging, amongst other current issues. Donovan describes education in New York City as a “dual pandemic” and asserts that the system must be reimagined to combat “ongoing systemic racism.” His focus on aging is unique to this mayoral race, with Donovan placing an emphasis on accessible healthcare and transportation.

Kathryn Garcia was previously the commissioner of the New York City Sanitation Department, and as of Sep. 2020, a candidate in the mayoral race. She has been a staunch adversary to Bill de Blasio, having resigned as commissioner in 2020 due to de Blasio’s budget cuts in the sanitation department, which created a 100 million dollar loss in funding. Her campaign is driven by COVID–19 recovery and focused on the importance of vaccinating New Yorkers alongside ideas such as universal broadband internet and free childcare. In a distinctive effort to combat police brutality, Garcia wishes to “increase the [NYPD] recruitment age from 21 to 25.” Regardless of her plans, she faces a hefty challenge, as many New Yorkers blame Garcia for NYC’s unsightly trash problem.

Raymond McGuire is not a politician –– and his campaign counts on that. A former Citigroup executive, McGuire was one of the highest-ranking business executives on Wall Street, helping businesses that generated upwards of $20 billion a year in revenue. McGuire, since moving to New York from Ohio in his youth, has focused on outreach and providing to New York’s most underserved. He places a special emphasis on the Black community both in and outside of his campaign, serving as a board member on several charitable organizations and dedicating his mayoral bid to solving racial unrest and economic recovery. To help “kids like him,” McGuire’s platform seeks to invest in children from “cradle to career,” making education more accessible, discouraging gang membership and improving city safety.

Carlos Menchaca serves New York City’s 38th district as a member of the New York City Council. An El Paso native, Menchaca is the first openly gay New York City Council member from Brooklyn and the first Mexican-American elected to public office in the city. Menchaca boasts himself as a candidate who will fight “against the wealthy and powerful” and for the public interest of New York City. He has taken firm stances against gentrification and discrimination and has established his campaign to encourage economic regrowth and equality after the pandemic.

Dianne Morales first announced her candidacy for mayor in late 2019, waiting almost a year to launch her campaign in mid-November of 2020 officially. Although she has relatively little political experience when compared to other running candidates, Morales has laid out a plan for her first 100 days in office. According to Morales’ campaign webpage, the plan is titled “Dignity Now,” and contains a series of progressive policies intended to respect and value every New Yorker. Among these policies include plans to stop collaboration between the NYPD and ICE, a temporary citywide prohibition of rent collection, housing the homeless, increased provision of mental health care and support for basic income.

Serving as the New York City comptroller since 2013 and a member of the State Assembly before that, Scott Stringer has maintained a reputation of upholding reformative values. As a candidate for mayor, Stringer has developed an agenda he refers to as the “Details to Deliver,” which spotlights environmental justice and plans to fight back against climate change from New York City. Stringer’s platform heavily reflects the Green New Deal that has been proposed on a national level, adapting its policies to be more city-centric. These environmental plans include promotion of greener and energy-efficient buildings in the city, a “Fossil Free NYC” movement to transition NYC communities towards green energy and the creation of jobs by promoting the production of green energy.

Loree Sutton stands out from her fellow candidates due to her life experience in the United States Military. Having retired from the US Army as a high-ranking psychiatrist, Sutton became the commissioner for New York City’s Department of Veteran Services. Sutton’s Broad Policy Agenda contains general ideas that Sutton plans to strive for if elected mayor. Among these are accessible health care, reform for K-12 education encompassing digital learning and multiple partnerships to update city transit systems.

Aside from having experience as a member of the NAACP Legal Defense Fund and the ACLU, Maya Wiley has attained political experience as Counsel to the Mayor in 2014. Currently, Wiley has created three different policy plans to tackle multiple problems across NYC, including the “Gun Violence Prevention Plan,” “New Deal New York,” and “Plan to End Evictions.” While the first and latter of these are fairly self-explanatory in terms of area of interest, “New Deal New York” plans to combat what Wiley notes as “the worst economic crisis in at least a generation.” The main tenets of Wiley’s “New Deal New York” operate under the belief that supporting small businesses and vitalizing labor protections are the keys to lifting the city out of an economic crisis.

Perhaps the candidate with the largest share of the spotlight, Andrew Yang, gained national attention as a Democratic candidate for the 2020 presidential election. One of Yang’s most prominent municipal policies adopts a plank from his presidential platform—universal basic income. Under Yang’s plan, New York’s poorest residents would be eligible to receive $2,000 per year and benefit from strengthened social relief programs. Environmental justice is another key component to Yang’s platform, making the city’s vehicular fleet fully electric by 2035 (among other policies). Criminal justice-focused policies in Yang’s platform include plans to name a civilian commissioner of the NYPD.

According to a recent poll conducted by Slingshot Strategies, a start-up political consulting firm, Yang leads the ranked-choice voting polls at 25% support. (It should be noted that Yang’s campaign sponsored the poll). Following Yang, 17% of New Yorkers chose Eric Adams as their first choice for mayor. In third place, Scott Stringer was the first choice for 12% of New Yorkers.