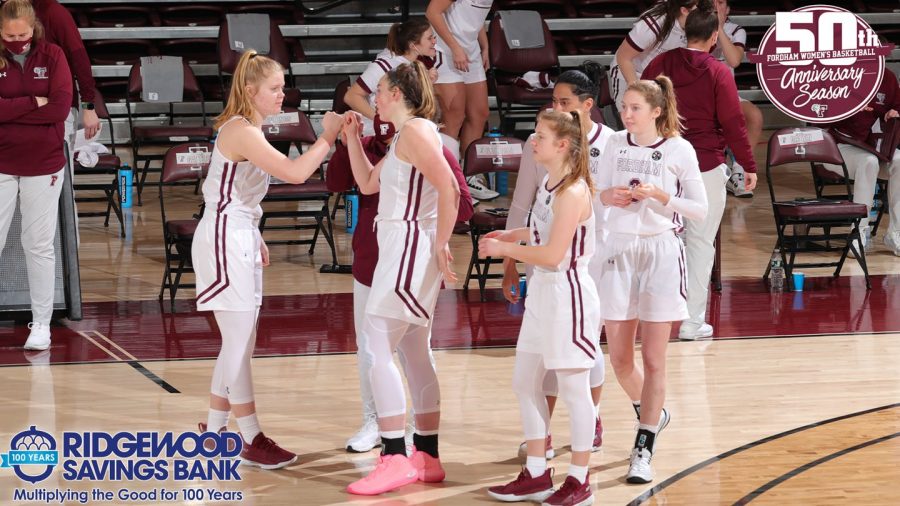 The women's basketball team was able to defeat St. Joes right before entering a two-week pause (Courtesy of Fordham Athletics)

Before the events of this weekend, which saw all Fordham Athletics games and practices shut down for the next two weeks, Fordham Women’s Basketball was rolling. Fordham had won four games in a row, and the team’s offense had scored at least 68 points in three of those four games. Entering a weekend where the team was supposed to host St. Joseph’s University and La Salle University, two of the teams near the bottom of the Atlantic 10 standings, Fordham had an opportunity to improve upon its 7-2 record in conference play.

Unfortunately, due to a spike in COVID-19 cases on the Rose Hill campus, Fordham only got to play one of those games. Without knowing of this latest, unexpected turn in an unprecedented season, the Rams certainly made it count.

The Rams got off to a slow start offensively, shooting just 3-13 in the first quarter. However, a stout defensive performance characteristic of the program’s culture led the team to an 11-7 lead after 10 minutes of play. In the second quarter, the shots began to fall. Fordham made four three-pointers in the second quarter and scored 18 points in the second to pull away from the visiting Hawks. Fordham held St. Joe’s to just 12 first-half points; 10 of those points belonged to junior guard Kaliah Henderson, who Fordham had a hard time containing in the half. Otherwise, the Rams’ defensive performance was pristine, allowing St. Joe’s to make just four of its 26 attempts (15%). Fordham led by as many as 19 points in the first half.

However, St. Joe’s came out swinging in the third quarter.

After being dominated in the first half, St. Joe’s went on a 13-3 run in the third. The Hawks got points from six different scorers during the quarter. In the first half, no Hawks players besides Henderson made a shot. This diverse offensive attack, combined with Fordham’s 1-13 shooting performance in the quarter, made it just a seven-point Fordham lead going to the fourth.

In the final 10 minutes, though, Fordham restored order and pulled away on the scoreboard.

Sophomore guard Anna DeWolfe’s jumper with 6:22 to play gave Fordham a nine-point lead, and baskets by junior forward Meg Jonassen and senior guard Kendell Heremaia shortly thereafter put Fordham up by 13. Heremaia’s three-pointer with 2:52 left put Fordham up 13, and the Rams went on to win 51-36. The Rams’ 51 points mark the fewest the team has scored in a win since Feb. 22, 2020, when Fordham handed Dayton its only conference loss of the season at the Rose Hill Gym.

Downey was the best player on the floor on Friday. She scored 15 points, hauled in 12 rebounds, earned six assists, handed out four blocks and made three steals. DeWolfe added 13 points and Heremaia scored 12 points and earned six rebounds. Senior guard Katie McLoughlin set a new career-high with 10 rebounds to go along with seven points.

Unfortunately for Fordham, the team’s best basketball of the season will be paused until at least Feb. 28. As part of Fordham’s shutdown of in-person activities, all athletics competitions and practices are on pause until then. This action will have wide-ranging effects on clubs and organizations across the Rose Hill campus, and the women’s basketball team is no different.

With this shutdown, the team will likely go to the A-10 tournament in Richmond, Virginia at the beginning of March without any runway to take off. The team’s regular-season finale was scheduled for Feb. 28 — the final scheduled day of Fordham’s lockdown — against Saint Louis. Assuming the season goes on as scheduled with the other A-10 member schools, Fordham has played its final game of the regular season. Seniors Heremaia, McLoughlin, Edona Thaqi, Ralene Kwiatkowski and Lauren Murphy have suited up for their final games at the Rose Hill Gym.

The next steps for the team remain to be seen. The Rams currently have the second-best record in the A-10, but the team could be usurped in the standings by other teams that now have several games in hand.

Fordham won impressively on Friday, but won’t have the chance to win again until March.