Women’s Basketball Bounced From A-10 Tournament By UMass 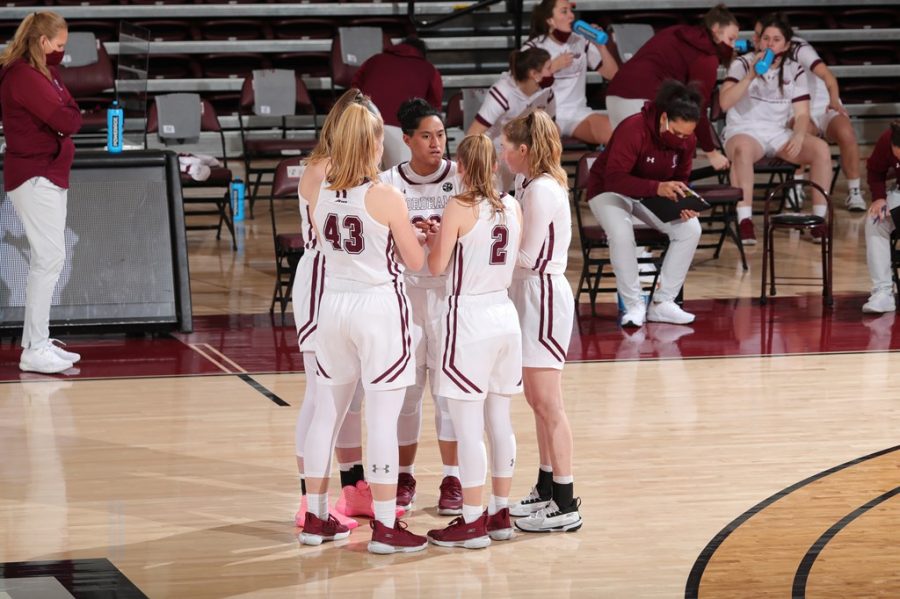 A game of uncharacteristic defensive lapses, turnovers and offensive inconsistency doomed the Rams against the Minutewomen. (Courtesy of Fordham Athletics)

Despite a year of adversity, pauses and uncertainty, Fordham Women’s Basketball made it to the end of the season as the No. 2 seed in the Atlantic 10 and earned a trip to the quarterfinals in the conference tournament. The Rams’ stay in Richmond, Va., though, didn’t last long.

Fordham fell 80-70 to the University of Massachusetts Amherst on Friday afternoon in the team’s earliest A-10 tournament elimination since 2018. The win sends UMass to the conference semifinals for the first time since 2002.

Both teams came out of the gates firing, combining for 41 points in the first quarter. UMass carried a three-point lead into the second quarter, and sophomore guard Anna DeWolfe keyed Fordham’s offense, as usual, with six first-quarter points. The Rams got an additional contribution off the bench from redshirt junior center Vilisi Tavui, who also scored six points in the quarter. Tavui had played in just four of Fordham’s 14 games before the school’s mid-February shutdown. Still, she played double-digit minutes in the team’s final two games of the season — against George Washington last week and on Friday in the conference tournament.

UMass expanded its lead to six points early in the second quarter, but Fordham was able to mount a comeback. A quick 7-0 run over just a minute-and-a-half in the middle of the quarter gave the Rams a one-point lead, and Fordham carried a three-point lead into the halftime break.

This game, though, was very different from the types of games Fordham usually plays and wins. Despite the lead Fordham held at the break, UMass shot 11-24 (45.8%) from the field in the first half behind 14 points from sophomore guard Sydney Taylor. Fordham had held its opponents below 60 points in 13 of its first 15 games, but UMass was on pace for 68 points after 20 minutes of play.

That rapid pace, which better suits UMass’ offensive attack, only accelerated after halftime.

Taylor’s excellent performance continued, and she was joined in excellence by senior forward Sam Breen, who dominated underneath with 17 points in the second half. UMass’ offense continued to find success, as the Minutewomen made difficult shots and pushed the pace in transition. UMass reinstated its six-point lead late in the third quarter, and despite a late-quarter Fordham surge, Taylor’s buzzer-beating layup put the Minutewomen up seven with 10 minutes to play.

With its back to the wall and its season on the line, Fordham turned to familiar faces for its comeback attempt. Senior guard Kendell Heremaia set up junior forward Meg Jonassen for a layup, and DeWolfe hit a two-point jumper to bring Fordham within three with 8:55 left. The margin stayed the same until 7:48 to go, but Taylor hit another clutch three to put UMass back up six. Each team then struggled to score until roughly five minutes to go, when DeWolfe and Breen traded layups.

Taylor’s three marked the last time the game was within one possession. Freshman guard Ber’Nyah Mayo’s jumper with 4:23 to go extended UMass’ lead to seven and the Minutewomen maintained that advantage for the rest of the game. Fordham’s offense went cold, failing to make a field goal for nearly four minutes late in the fourth quarter. Sophomore guard Sarah Karpell’s three with 1:10 left broke the drought but only brought the Rams within 12. Despite multiple efforts to extend the game, Fordham fell by a final of 80-70.

Much credit should be given to UMass for its performance in this one. Taylor had the best game of her collegiate career, tying a career-high with 27 points. Breen, like in the teams’ first matchup back in January, made life very difficult for Jonassen inside, making difficult shots and extending her range beyond the arc. Breen finished with 21 points and 12 rebounds.

DeWolfe once again led the Rams offensively, as the Atlantic 10’s co-Player of the Year finished with 25 points on 8-23 shooting. While she occasionally forced matters offensively in the second half, she was the Rams’ best option offensively. Senior guard Katie McLoughlin, playing in her final A-10 tournament, scored 10 points, as did junior forward Kaitlyn Downey. Heremaia had seven assists and eight rebounds but shot just 1-9 from the field to go along with six turnovers.

Fordham’s offense, despite its productivity, ended the game with 15 turnovers, a number above its season average in conference play. The story of the game was UMass’ offense, which scored the most regulation points of any team against Fordham since March 22, 2018, when Virginia Tech blew out the Rams 81-50 in the Sweet 16 of the WNIT.

This unprecedented season is not over for Fordham. The Rams still have a chance to make a slimmed-down WNIT field of 32 teams. Fordham currently owns a NET ranking of 70th, which would not portend an at-large bid in the NCAA Tournament, but could get the Rams to the WNIT, which the team would have made last year were it not for the pandemic.

But for the moment, the team awaits its next steps. Those don’t include winning the Atlantic 10 Tournament.