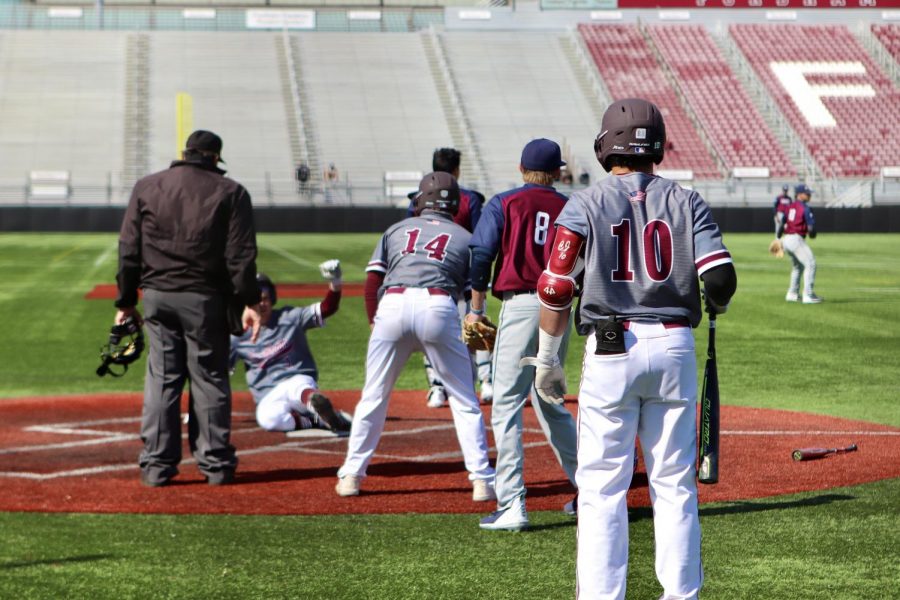 Over the weekend, Fordham continued their positive start to the season as they faced Fairleigh Dickenson. (Mackenzie Cranna/The Fordham Ram)

Fordham Baseball entered this weekend’s games having won 14 consecutive games dating back to the abbreviated end of last season. Although that streak came to an end this weekend, Fordham nonetheless won another series in its early-season out-of-conference slate.

The Rams took two out of three games from Fairleigh Dickinson University this weekend at Houlihan Park in the Bronx. Fordham’s lone loss came on Saturday, in a game that lasted 16 innings and nearly five hours.

Fordham coasted to a 9-0 victory on Friday afternoon. On an unseasonably warm day in the Bronx, senior starting pitcher Matt Mikulski brought the heat, pitching five hitless innings to go along with seven strikeouts. While six walks demonstrated how he struggled with his command throughout the day, Mikulski looks to be rounding into dominant form shortly before Atlantic 10 play. Perhaps the bigger head-turning performance in Friday’s game came from freshman reliever Declan Lavelle, who, in his first collegiate appearance, allowed just one hit in four innings to go along with six strikeouts and no walks. Lavelle could become an important weapon among Fordham’s pitchers as the season progresses. Offensively, the Rams got run-scoring hits from junior outfielder Jake Guercio, junior infielder Jack Harnisch, senior outfielder Colton Snelling and junior catcher Richard Grund. Fordham led 6-0 after the third inning and never looked back.

The win seemed to be a harbinger of what the weekend would bring. Fairleigh Dickinson hadn’t scored a run in two games, and struggled to contain Fordham’s offense in the series opener. As it turned out, Friday’s game wasn’t an indicator of the next two games at all.

On Saturday, Fordham jumped out to an early lead behind a run scored in the fourth inning — as a result of a wild pitch — and an RBI single from junior outfielder Jason Coules in the sixth. Fordham’s pitching appeared to be dominant once again: junior starter Cory Wall pitched three scoreless innings and fellow junior Garrett Crowley added three more scoreless innings behind him. Fordham carried a 2-0 lead into the seventh, and it looked like head coach Kevin Leighton’s team was in a good spot.

Fairleigh Dickinson freshman Tommy Verga singled to lead off the inning, and he advanced to third base with two down. Despite being in position to get through the inning unscathed, Crowley allowed a two-out walk to junior Jake Ellowitz, who subsequently stole second. Then, freshman second baseman TJ Werner delivered the biggest hit of the Knights’ season to that point, driving in both runs and tying the game at two. Crowley, for his part, recovered nicely from surrendering the lead, holding the Knights in check for the next two innings.

The defining failure of Saturday’s game for Fordham became the inability to convert scoring opportunities into runs. Despite conceding the lead in the top of the seventh, the Rams had at least one runner in scoring position in each of the next five innings, but were unable to drive any of those runs home to win the game. As sophomore Jack Popolizio and senior Joe Quintal combined for six scoreless innings to keep Fordham afloat in extra innings, the Rams found a couple more opportunities in the 14th and 15th innings. In the 15th, Harnisch was at third with just one out, but sophomore Ryan Thiesse struck out and senior CJ Vazquez flew out to end the rally.

In the 16th, the Knights finally broke through. Sophomore outfielder Justin Sierra whacked a two-run double off Fordham sophomore Ben Kovel to put the Knights up 4-2. Fairleigh Dickinson freshman pitcher Jude Baxt closed out the Rams in the bottom half of the inning and handed Fordham its first loss since February of 2020. The 16-inning game was tied for the second-longest in the storied history of Fordham’s baseball program, and was the longest Fordham Baseball game since the Rams’ 1988 NCAA regional against Clemson.

With both teams fatigued from Saturday’s marathon — and losing an hour of sleep overnight — Sunday’s game decided the series. Junior catcher Andy Semo got Fordham on the board first with a sacrifice fly in the second inning, but FDU soon responded with a run of its own in the third. The Knights took the lead in the sixth on a sacrifice bunt by senior James Donlon.

Fairleigh Dickinson starter Jack Kosowsky pitched four innings and allowed just one run. Senior Aaron Cohn came on to relieve him in the fifth, and his grip on Fordham’s offense was immediately tenuous. After twice leaving a runner at third in his first two innings, Guercio’s RBI single in the seventh brought home Snelling to tie the game at two. Harnisch attempted to score from first after Guercio became ensnared in a rundown, but was tagged out on a relay throw. After Fordham sophomore Alex Henderson threw a scoreless eighth, Fordham’s offense had another breakthrough with runners in scoring position.

With two out and Coules at third base, senior infielder Nick Labella hit a bouncing ball up the middle. Shortstop Hunter D’Amato cut it off behind second base, but his throw to first was late. Coules scored and the Rams took a 3-2 lead. Fordham then added much-needed insurance; Snelling singled home Labella and Guercio broke the inning open with a two-run single two batters later. Fordham took a 6-2 lead into the ninth, and Henderson recorded the final three outs to earn his second win of the year and clinch the series for Fordham.

Freshman pitcher Brooks Ey provided perhaps the most important contribution for the Rams on Sunday. Despite occasional hardships, Ey pitched seven innings and gave up just two runs. Most importantly, though, he saved Leighton from pulling more resources out of a bullpen that was stretched thin after Saturday’s affair.

Fordham is now 7-1 on the season, with some time before it hits the field again. After Wednesday’s game with Stony Brook University was postponed, Fordham will take on St. John’s University over the weekend in a four-game series that will be split between Queens and the Bronx.