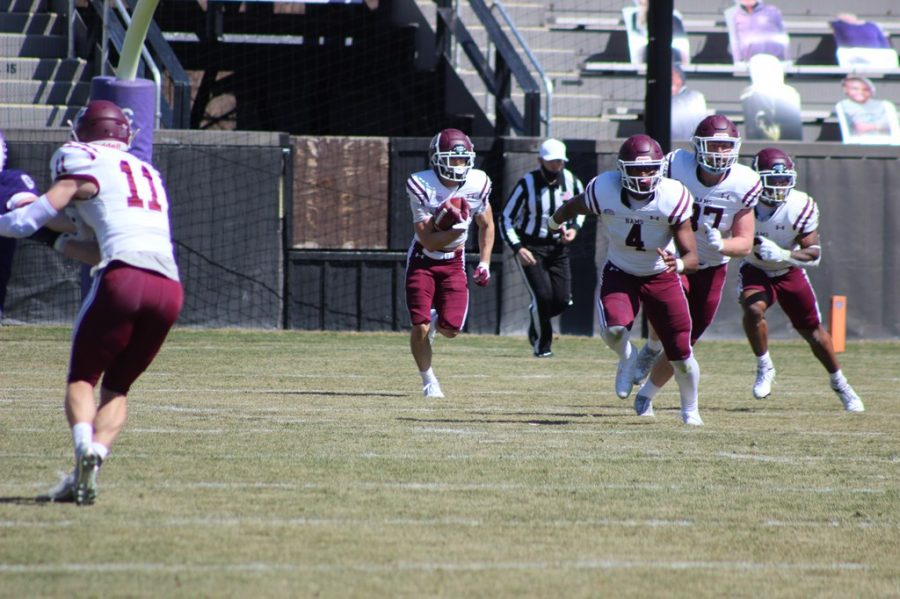 Conlin was pleased with his team's efforts on the afternoon, but the end result will linger in such an abbreviated season. (Courtesy of Fordham Athletics)

At long last, football season has arrived for Fordham University. The anticipation of this upcoming season and whether or not it would end up happening that has built up over the past year made the season opener on the road against the College of Holy Cross on Saturday a spectacle in itself for the Rams. But when kickoff commenced, and the clock began running, all of that anticipation became simply a part of the past.

Fordham fell in the first game of their 2020-21 season to the Holy Cross Crusaders 34-24. There were certainly high points for the Rams in the game, specifically moments of pure offensive power and prowess, but with the giddiness of finally getting to play a thing of the past, it is now time for the work to be done in a season that will not provide an awful lot of time to do so.

The Rams jumped out to a quick start against the defending Patriot League champions, as sophomore wide receiver Dequece Carter’s 46-yard reception into the end zone completed a 79-yard opening drive and put Fordham up 7-0 after the first possession of the matchup. That was just part of the 11 catches and 155 total yards Carter would have on the day.

The Crusaders were able to immediately follow up with a scoring drive of their own to get themselves on the board. Capping off an 11-play drive that lasted over six minutes, Holy Cross kicker Derek Ng nabbed a 47-yard field goal, good for three points. After a quick Fordham drive without any scoring, Holy Cross got the ball back and was able to convert for a field goal yet again, with Ng this time kicking for 36 yards and making it a one-point game by the time the first quarter wrapped up.

A couple of minutes into the second quarter, the Rams were found repeating themselves, but for the best. At the conclusion of another 70+ yard drive, sophomore running back Trey Sneed found himself in the end zone on a 1-yard run, helping Fordham get another seven points on the board, putting them ahead 14-6.

And then, the Crusaders began their stomp back and showed why they won the Patriot League almost a year and a half ago.

Rounding out the first half, Holy Cross returned a Fordham punt in the shortest possible way to get into the end zone for the first time on the afternoon, with the Crusaders’ Terrence Spence picking up a blocked punt from Rams junior kicker Nick Leinenweber by holding on and winding up past the goal line. After an interception of a pass by Fordham junior quarterback Tim DeMorat, the first half had concluded, and all of a sudden, Holy Cross was in control on their home gridiron.

Going into the third quarter, Holy Cross was able to hold onto that momentum, climbing back on the board first about halfway through the intermission period. On the second play of a drive that was short in time but not length, quarterback Matthew Sluka ran for 15 yards to secure a Crusaders touchdown and cap off a couple of plays that brought the home team 63 yards in a matter of 25 seconds. The score finally put the Crusaders ahead, 20-14.

The Rams were able to get themselves back into scoring a handful of minutes later, when Leinenweber kicked a 19-yard field goal, nabbing another three points for Fordham and keeping them within three points of their opponent, but this was the closest Fordham got to being on top in the latter part of the game.

Before time was up in the third, Holy Cross found themselves in the end zone yet again, this time by means of a much longer run by Sluka, this one for 57 yards. With 15 minutes left to play at the start of quarter number four, Holy Cross was ahead by a margin of 27-17.

And when the fourth quarter started, they scored again.

This time, Sluka found himself on the other end of the ball, firing an 11-yard pass to wide receiver Jalen Coker, giving their team a comfortable 17-point advantage with just 7:52 left to play in the afternoon affair. The Rams were able to secure one more successful touchdown run before time let out, this one from a 30-yard pass from DeMorat to sophomore wide receiver MJ Wright. Still, that score would not be nearly enough after the monstrous, 28-point onslaught that the Crusaders had displayed since late in the second quarter. The final score was 34-24 in favor of the home team, giving the Crusaders a win to bring them to 2-0 and the Rams a tough loss to start their short season.

“I thought we fought hard,” were the first words out of Fordham head coach’s Joe Conlin’s mouth following the loss on Saturday, his team’s first game since November 2019. “In the first half, defensively, we played great… [but] on the road, against the defending champions of your league, you can’t get kicks blocked.” The blocked kick that resulted in a Holy Cross touchdown was just one of a couple of team errors that Conlin pointed out in his post-game remarks.

“In the second half, they hurt us with the quarterback run,” Conlin went on to highlight. “I thought we fought back offensively, and there were a couple situations where the game could have gone either way.”

There lies Conlin’s signature optimism, a trait that is perhaps an incredibly necessary tactic in a season that is so short it is bound to be as thankless as it is unforgiving. It is worth noting that this year’s Rams result against Holy Cross is an improvement upon a matchup on the Rose Hill campus last season that saw the Crusaders score all 49 of their points in the second half.

But, nevertheless, a game in the loss column is exactly that, and Fordham will not have much time to recover. Their next matchup will be Saturday, April 3 at 4:00 p.m. in the Rams’ home opener at Jack Coffey Field against the Colgate University Raiders. After that eventually comes the rescheduling of a postponed game against Bucknell University, another try against Holy Cross, this time at home, and then the regular season is over.

More so than any other year, the Fordham football season has only just begun, and already, it is nearly over.