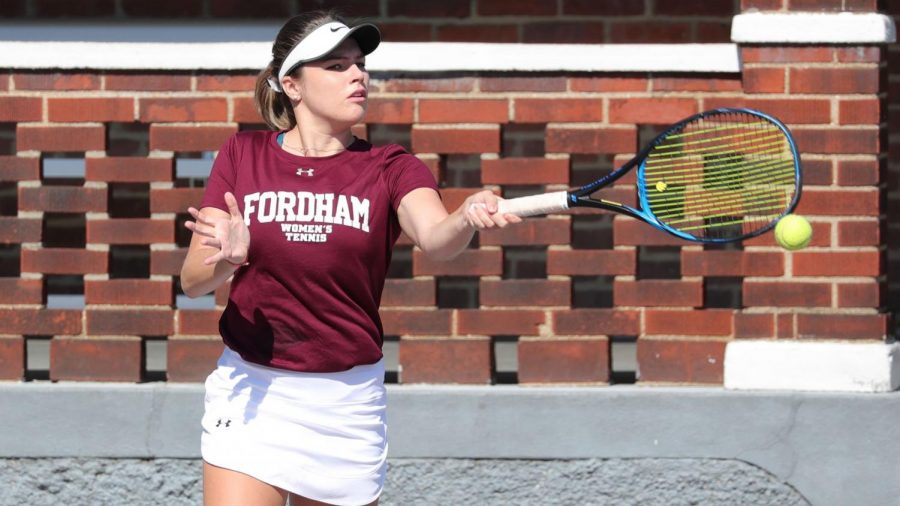 Quenville (above) contributed to the Rams' dominating performance against Saint Joseph's in in their biggest win of the latest bunch. (Courtesy of Fordham Athletics)

Over the past two weeks, the Fordham women’s tennis team played four matches, with two of them at home and two away. They played against Quinnipiac University at home, followed by Drexel University and Saint Joseph’s University away and finally concluded against the University of Rhode Island at home.

The Rams started off with a narrow 4-3 win against Quinnipiac. Fordham opened up by winning two out of the three double matches, therefore, securing the double point. Then in singles,  senior Arina Taluyenko, freshman Elini Fasoula and junior Nicole Li won their matches to push them over the edge and win the close battle.

After this narrow win, the Rams then visited Drexel where they prevailed with another narrow 4-3 win. Once again, Fordham took the pivotal doubles point by winning two out of the three double matches. As for the single matches, Fasoula, Li and returning Senior Maia Balce were victorious in their games, giving the Rams their fourth victory in a row to extend their streak.

The Rams then visited the struggling Hawks and kept their impressive run of form with a rout of Saint Joseph’s in a commanding 6-1 win. The Rams started off winning the double point by winning two of the three double matches. The lone defeat in doubles was due to a shortage of players from the Rams, therefore giving the Hawks an automatic win. The Hawks’ singular point was due to one of the singles matches being uncontested. Taluyenko, Balce, Fasoula, Li and junior Genevive Quenville all posted dominating performances to easily cruise to victory.

After their fifth win in a row, the streak came to an end at home against the University of Rhode Island in a 5-2 defeat. Heading into this match, the Rams were already at a disadvantage since only five players were available due to injuries. The Rams lost the doubles point despite splitting the two double matches that were played. As for the singles side, only Taluyenko and Li won their matches on the day as the Rams’ five-game winning streak was snapped.

After these matches, Fordham’s record is 5-2. Their next match is against Temple University on April 16 at home on the Hawthorn/Rooney Courts. Immediately following that, they then visit Stony Brook University on April 17 with the hopes of resuming their impressive run of form before the upcoming Atlantic 10 Championship at the end of this season.