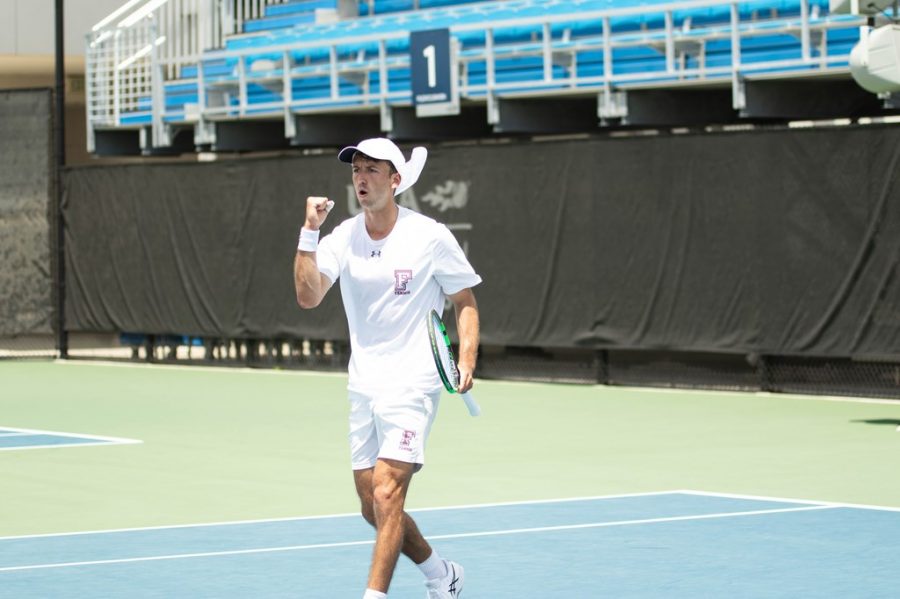 Makatsaria (above) sparked the Rams' success against La Salle to highlight their A-10 Tournament run. (Courtesy of Fordham Athletics)

Fordham Men’s Tennis has had a rather solid 25-year history as a program, consistently contending in the Atlantic 10 conference and having their share of greats in the ranks. But one pinnacle the program has yet to reach is a spot in the conference tournament’s semifinals. This situation is clearly a monkey that the program would like to get off of its back. Unfortunately, while they did come close, the Rams were not able to get to the semifinals this year, winning in the first round of 2021 Atlantic 10 Tournament in Orlando, Florida 4-1 over La Salle University but eventually falling in the quarterfinal matchup that followed with the University of Richmond 2-4.

With those results, the squad finishes the unique and oddly truncated 2021 season with an even record of 6-6, making the best out of what was of course a rather remarkable and unfathomable situation of playing a season amid a pandemic.

The Rams got their Atlantic 10 tournament campaign started on Thursday when they, as the number six seed overall in the tournament, took on La Salle, ranked as the eleventh seed themselves, and defeated the Explorers without much of a problem.

La Salle got off to a strong start in the matchup winning two of the three doubles matches and taking the opening point, as seniors Fabian Mauritzson and Lutwin de Macar fell to the Explorers’ Connor Merrill and Rogelio Gonzalez 7-5 and juniors Tom Russwurm and Jofre Segarra were easily handled by Brandon Caban and Dylan Tull by a score of 6-1.

That was the Explorers’ only point on the day. It was all Rams from there.

Senior Alex Makatsaria got the scoring started for Fordham as the first singles competitor coming out victorious with a 6-3, 6-4 win over Merrill. Following that, de Macar ended up on top in his battle with Colin Lucius, 7-5, 6-2, and senior Max Green routed his opponent, Nassim Fenjiro, 7-5, 6-0. Closing out the afternoon and clinching the victory for Fordham was Segarra, taking down Tull 6-2, 7-6(2), giving the Rams a 4-1 win and a spot in the following day’s quarterfinals proceedings. Russwurm’s match with Caban and Mauritzson with Gonzalez were both left unfinished.

The following day, the order became a much taller one for Fordham, now being in the tournament’s quarterfinals and having to face the Richmond Spiders, ranked third overall in the conference. Ths Spiders had control for just about the entire afternoon.

The Rams dropped the doubles point for the second time in as many days, losing in the first and third slots once again (with the same pairs in those slots as well), and it was clear from that point on that Richmond had their number on Friday.

After the Spiders won the first match in the singles portion of the affair and grabbed onto a 2-0 lead, de Macar was able to get Fordham on the board, defeating Richmond’s Campbell Erwin 6-4, 6-3 and cutting the Spiders’ lead in half. The Rams squeezed out one more point against Richmond from a Mauritzson win in the top slot over his opponent, Matt Fernandez, 7-6(5), 6-3, but that was the last of their scoring, as Russwurm’s, Makatsaria’s and freshman Nicholas Kanazirev’s losses to Josh Keitelman, John Walsh and Daniel Kliebhan of Richmond, respectively, were enough to get the Spiders the four points they needed to secure victory and grab a spot in the semi-finals. Green’s matchup with Alex Wernink was left unfinished.

For the Rams, the season has come to an end. While their trip to the Atlantic 10 Championship was not as fortuitous as they hoped, like any Fordham program, Men’s Tennis can see this season, one in which there were an incredibly short amount of chances to prove themselves and had to be played in pandemic precautions, as the best that could possibly be done in the circumstances.

They are circumstances that the program has never had to face in their 25 years, and, like all of Fordham Athletics, they hope it is a situation they will never have to face again.