Fordham Softball Season Comes to a Close in A-10 Semifinals 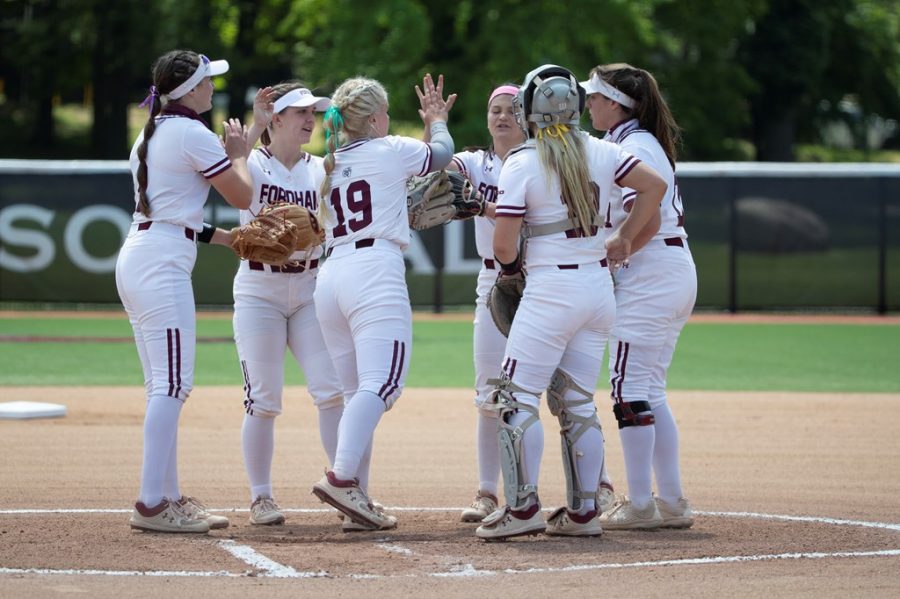 Softball found its revenge against St. Joe's but could not overcome a set of stiff competition on tournament day two. (Courtesy of Fordham Athletics)

It has been a season unlike any other for Fordham Softball. As every other team across the country knows, there have been COVID-19 pauses and shutdowns, canceled matches and brand new ones placed on the schedule. Players coming back for an extra year and some missing out on the season as a whole.

For Fordham, a team that traditionally likes to load up its non-conference schedule was forced to stay within the Tri-State. And even though they were able to field a complete season — an accomplishment in itself — it looked much different than most others. Ultimately, the end goal of an Atlantic 10 Championship remained the same, however. The journey toward yet another came to an end for Fordham on Friday in Philadelphia.

This year’s tournament looked a bit different as well. Retaining its usual double-elimination format, only four teams entered it as opposed to the usual six. The year’s host was meant to be the top seed, but George Washington University declined the opportunity, swinging things over to the next best, Saint Joseph’s University in Pennsylvania.

Against that same team was where Fordham’s quest for an eighth consecutive A-10 Championship began. After sharing the honor with George Washington in 2019 and missing out on the chance to claim a trophy the following year, Fordham approached this season with extra motivation. That is especially true for their opener against St. Joe’s, who took three of four from them in a series the weekend before at Bahoshy Field.

Fordham told a different tale this time around, knocking down the Hawks in a redemptive victory to start their tournament run from the third seed on the right foot. Sending out graduate ace Madie Aughinbaugh, St. Joe’s brought three runs home but the Fordham bats were too much to handle, granting the Rams a 7-3 victory.

Kicking things off in the afternoon start, Aughinbaugh lasered a single only to be followed by a massive two-run homer from first baseman Rachel Hubertus. The senior slugger’s terrific season continued for what was her team-leading 13th home run and 54th RBI of the season. The Hawks grabbed one back in the bottom half of the inning, but Fordham took care of business in the second.

There, outfielders sophomore Michaela Carter and senior Brianna Pinto and junior Julia Martine all singled to load up the bases and put Fordham in prime scoring position with just one down. Junior second baseman Sarah Taffet walked to bring in one run and a fielding error produced another. After just two innings, Fordham forced Amanda Herr out of the game, the same junior who had cruised to a pair of wins against them just a week ago.

It was an early sign that things were different this game, and Fordham added two more runs with a single from freshman third baseman Bailey Enoch and an RBI groundout courtesy of freshman Bella Ayala, serving as designated hitter on the day.

Each team added one run to the scoreboard down the stretch, but the game was clearly in Fordham’s favor. Aughinbaugh raised her level of play when it counted, allowing just five hits and one earned run over her complete seven innings of work for the victory.

It was not the only “surprise” result of the day, with the favorites, George Washington, falling to the fourth-seeded University of Dayton, 2-0. The Colonials lived up to expectations in the tournament’s third game, an 8-0 beatdown of St. Joe’s to end the Hawks’ extraordinary season in uneventful fashion.

Fordham then entered Friday without a blemish on its resume, though the first came in the day’s opener against Dayton. With a deceptive 21-26 record, Dayton succeeded in conference play at 14-8 to earn its spot in the tournament, and they showed exactly why against Fordham.

The Rams sent their sophomore sensation, Devon Miller, to the mound. And after two quick innings, including a trio of strikeouts in the second, it looked like the bright lights were not too much for Miller in her first tournament appearance. However, the Flyers changed that around in the third, bringing four runs home to give themselves the early lead.

Megan Gist got the scoring started with an RBI home run, and a few errors from Miller and the infield — including a pair of walks, a wild pitch and Martine’s 13th fielding error of the season — put Dayton in position to add some more. That they did with a three-run double from pinch hitter Taylor Erschen, as the freshman capitalized in a major spot.

Head coach Melissa Inouye gave Miller a chance to find her footing in the fourth, but a pair of base runners followed by another RBI double, this time from Megan Ward who was three for four on the day, left her with no choice but to take the freshman out of the game. Enoch stepped in to pitch the rest of the way, allowing just five hits and no earned runs over her three innings of action, but the damage was already done.

Fordham managed to find one run — an unearned one that brought home Aughinbaugh — but Addy Bullis was terrific for the Flyers, with five strikeouts dealt and just three hits coming back her way. All of that contributed to Dayton handing Fordham its first loss of the tournament, 7-1.

Now, with their backs against the wall, the day’s second game was the one Fordham had been waiting for, a 2019 Championship rematch with George Washington. Despite coming before the final, it was a win-or-go-home scenario for both sides, each of whom fell to the Flyers.

And that tension was there for five innings, a tight 1-0 battle with Fordham in front. However, things suddenly changed in the sixth, an explosive eight-run inning for the Colonials that gave them the lead, the victory, and eventually, the A-10 Championship.

Fordham again turned to its trusty ace for its biggest game of the season, and for a majority of it, Aughinbaugh delivered. She silenced the Colonials’ offense, allowing just four hits, three of which came in the second inning alone. Offensively, though, Fordham faced similar struggles, as Sierra Lange sliced through the Rams, finishing her day with nine strikeouts and a meager one earned run.

For some time, that one run — a sacrifice fly from Martine in the second to score Carter following a leadoff double — looked to be enough. However, whereas Aughinbaugh matched Lange stride-for-stride throughout the first five innings, the sixth made the difference.

There, a stagnant George Washington offense broke loose, with seven hits and eight runs to send themselves into a finals matchup with Dayton. Lange shifted from the hill to the plate, sparking the outburst with a leadoff single and coming home after a two-run bomb from Alessandra Ponce.

That was only the beginning, though. George Washington quickly brought on two more base runners after a pair of hits into left field and Hannah Eslick brought them both home with a single down that same line.

Four runs came in but there were still four more to come. The Colonials quickly restored their presence on the bases with some infield action, and they again capitalized behind a fielder’s choice resulting in a throwing error and an RBI double from Jenna Cone. Just like that, Aughinbaugh’s blissful day evolved into chaos, and Miller came in to take things the rest of the way.

Still with two on base, George Washington scored both of them with a single swing of the bat from Lange, bringing things full circle from where the inning started. 8-1 was the final and the Rams’ run in the A-10 Championship reached its end.

George Washington then entered the final needing to beat the undefeated Flyers twice. And as a Championship team does, they fended off the Flyers for a 3-2 win in Sunday’s first game and put them way 7-2 in the second to earn back-to-back A-10 Championships.

For Fordham, one can imagine it was difficult watching the Colonials hoist the trophy and advance to their first NCAA Tournament appearance in the Baton Rouge Regional, especially so when they were three outs away from having a chance to be there themselves.

Regardless, their accomplishments for this season transcend the end result. Fordham would claim a program-record .499 slugging percentage, second-best .387 on-base percentage and third-highest batting average at .306 were the season to end here. Pinto is a key reason for the latter, as her .431 average would become the single best in school history and her 28 stolen bases the third-most in a single season. Additionally, Hubertus’ team-high .669 slugging percentage resulted in 54 RBIs, tied for fifth all-time.

And despite the disappointing way in which it ended, Aughinbaugh has undoubtedly produced one of the greatest careers in Fordham Softball history. The stats speak for themselves — top-three in numerous pitching categories ranging from innings pitched to wins to strikeouts — but what echoes the loudest is her constant staying power, commitment to improve and leadership that contributed to so much of Fordham’s success over her time with the program.

Ultimately, even though they fell short of their objective, Fordham can walk away from this season with nothing but pride. It was an unusual one, and the Rams managed to persevere through it all the way to the end. And, if anything, it will be an experience to look back upon when that trek toward another A-10 Championship begins next year, hopefully in a season that looks a bit more normal than this.