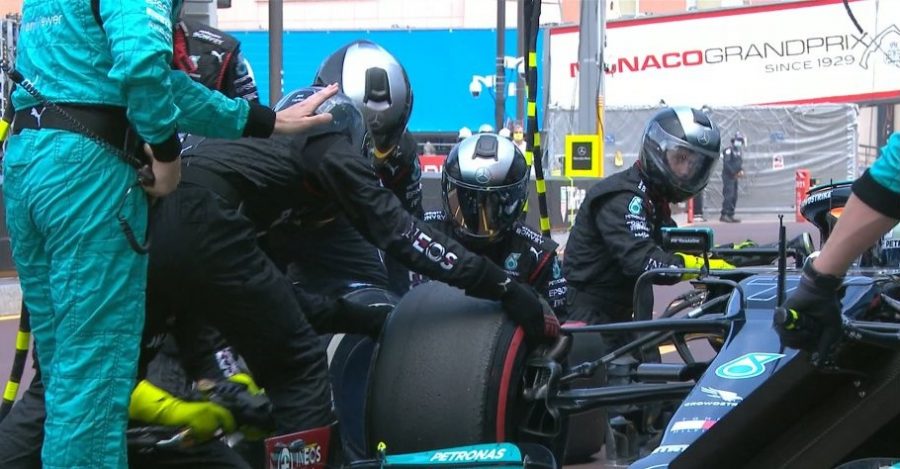 Valtteri Bottas had to retire during the Monaco Grand Prix due to the fact that they could not remove the right front tire (pictured above) during his pit stop. (Courtesy of Twitter)

Last week, F1 continued its season with the Monaco Grand Prix, one of the most historic tracks on the calendar. Qualifying was extremely important due to the fact that overtaking is a nightmare on the course with its street circuit layout. Max Verstappen and Red Bull needed to have a good race to keep the pressure on the Mercedes of Lewis Hamilton. However, during practice, a different team took the headlines. Both Ferrari’s of Charles Leclerc and Carlos Sainz showed that they had pace in a welcome surprise from the prancing horsemen who had a dismal season in 2020 and are looking to return to their former glory.

Ferrari’s pace continued to impress with Leclerc grabbing pole position during qualifying. However it did come at a price. On his final lap, Leclerc crashed out, bringing out the red flag and ending qualifying due to the fact that there was only 15 seconds remaining in the session. This was Ferrari’s first pole position in over a year and shows the massive strides that they made during the offseason. Verstappen qualified with Hamilton’s teammate Valteri Bottas in third. Sainz qualified in fourth and Hamilton qualified in an abysmal seventh place.

However, disaster struck for Leclerc. The damage from the qualifying crash could not be repaired in time for him to start the race. This continues Leclerc’s poor form of not even passing the chequered flag at his home Grand Prix. This essentially promoted everyone by one grid slot, making Verstappen the de facto leader. As the lights went out, Verstappen got away brilliantly and retained the lead. From there, drivers were managing their tires and hoping for a safety car, which in Monaco is usually a safe bet.

Hamilton was first to pit on lap 29, attempting the undercut Pierre Gasly’s Alpha Tauri that sat ahead. Not only did that not work, but he eventually lost two more places to the cars directly behind him which were Sebastian Vettel’s Aston Martin and Verstappen’s teammate Sergio Perez.

Mercedes’ day went from bad to worse. When Bottas came into the pits for a routine stop, the front right tire refused to get off the car. This resulted in a long pitstop which saw Bottas tumbling down the order. That tire led to Bottas retiring from the race since it couldn’t be removed. The tire stayed on the car for four more days until being ripped off at the Mercedes headquarters.

This meant that Verstappen was in the lead followed by Sainz and the McLaren of Lando Norris in third. After the pit stops, Perez jumped into fourth after starting in eighth. Hamilton was still in seventh. The rest of the race was mundane with Perez attempting to pass Norris for the final podium place in the closing stage as the only noteworthy event.

Verstappen took the flag and won the Monaco Grand Prix with Sainz in second and Norris held on for third for his second podium this season and 3rd overall, showing McLaren’s pace. Hamilton finished in seventh and with Bottas’ retirement, for the first time since the German Grand Prix in 2019, Mercedes are not leading the Drivers’ and Constructors’ Championships. Verstappen now leads the Drivers’ standings by four points while Red Bull edges Mercedes by a singular point.

The full race results and standings can be found here. The next race is in Baku for the Azerbaijan Grand Prix. Like Monaco, it is a street circuit but does have a lot of overtaking opportunities, especially on the 1.3 mile main straight, one of the longest in the season. It has a technical part with the castle section but it also has a couple of long straights. It will test the driver’s overtaking, defending and skill to finish the race. With the championship changing hands, it is shaping up to be a title race to remember.