Bethany Fernandez Studies the Pandemic’s Impact on the Bronx Community 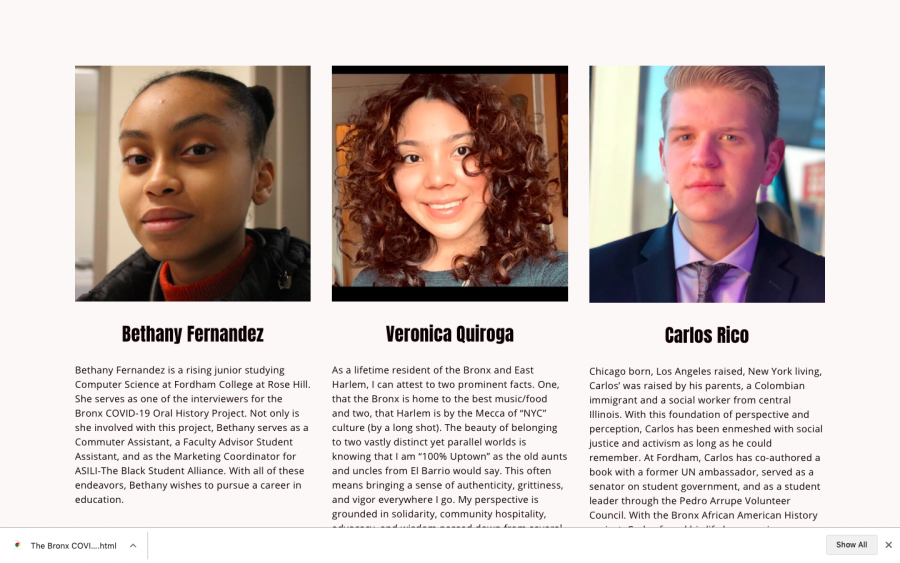 Bethany Fernandez, FCRH ’22, spent the last year interviewing Bronx community members and gathering their stories regarding the COVID-19 pandemic as a part of the Bronx COVID-19 Oral History Project.

The project was founded by Fordham alumna Veronica Quiroga, FCRH ’21, and Dr. Mark Naison, a professor in the African and African American studies department. The project’s official website states that it seeks to prevent “the voices and stories of the Boogie Down Bronx [from] being lost.”

It serves as a subsection of the Bronx African American History Project (BAAHP), an ongoing effort founded and directed by Naison meant to uncover “the cultural, political, economic and religious histories of the more than 500,000 people of African descent in the Bronx,” according to the department’s website.

When the pandemic interrupted the traditional in-person interviewing process, Quiroga and Naison were inspired to collect the stories of Bronx sites affected by COVID-19, said Fernandez.

Fernandez has a personal connection to the project, having grown up in the Bronx herself.

“I decided to get involved in this project because I’ve lived in the Bronx my whole life, so I deeply care about issues of the Bronx,” said Fernandez. “It’s important to show that the Bronx is a place where there are people who are living their lives, trying to make the best of things and navigate through the world.”

The project’s website includes information on the borough, citing its status as the home of the poorest congressional district in the country. It also cites that higher rates of certain preexisting health conditions, like diabetes, asthma and hypertension, have made Bronx natives more vulnerable to COVID-19 than other New York City communities. “The borough ranks last among New York State’s 62 counties in the Robert Wood Johnson Foundation’s survey of health outcomes, including premature death,” the website states. “These are pre-pandemic figures — it only is exacerbated when the disease is factored into account.”

Fernandez said she hopes the project showcases the reality of how the pandemic has affected the people of the Bronx. “[The project] is not designed to create a fluffy story,” she said. “We don’t get anything from just saying this is a sad story. We get more from it when we are able to show the nitty gritty, the struggles that come from it [COVID-19].”

Fernandez stated that part of the motivation of the Bronx COVID-19 Oral History project is to challenge the way Fordham faculty and students perceive the Bronx.

She pushed back against the common belief among the Fordham community, especially students unfamiliar with the burrough, that the Bronx is more dangerous than other areas. “They make up these beliefs and theories based around stigma and not what they’ve actually experienced,” Fernandez explained.

Fernandez said that, along with sharing community experiences, the Bronx Covid-19 Oral History Project amplifies the work of featured artists, vendors and sellers that are based in the Bronx. Businesses such as The South of France and Soul Snacks Cafe have received catering gigs due to exposure from the project, she said.

Fernandez hopes to continue providing businesses with exposure through the Bronx COVID-19 Oral History project. “This is an ongoing project, and there is still stuff to work on considering the delta variant,” she said. “This means there is more concern, more stories, more people affected by the pandemic.”

Readers can learn more about the project and its findings by visiting its official website at thebronxcovid19oralhistoryproject.com.