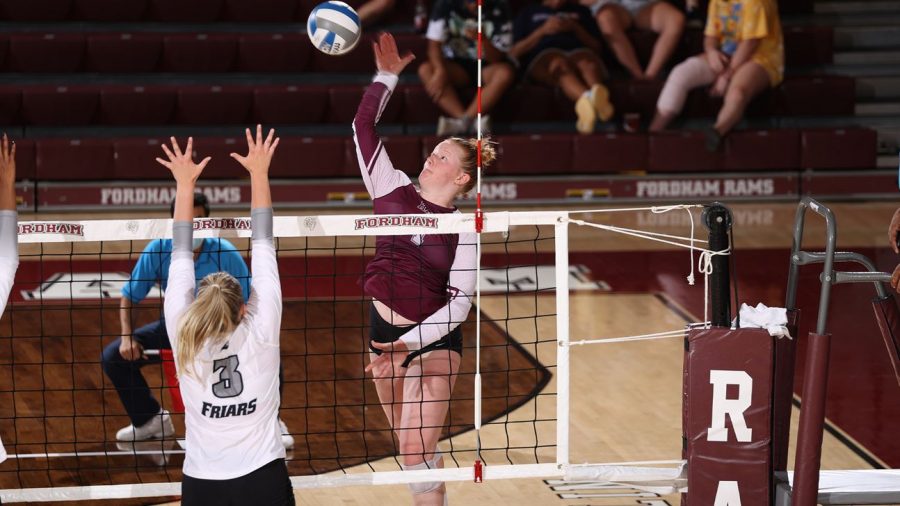 Despite the outcomes, Moody (above) and the Rams plan to focus on the positives of their first two conference matches. (Courtesy of Fordham Athletics)

Fordham Volleyball traveled to Virginia Commonwealth University and Davidson College for the start of their Atlantic 10 competition. They lost to VCU in three sets on Friday and took Davidson to four sets on Saturday.

VCU finished second in the A-10 last year, and their dominance showed from the initial set before Fordham got closer in the last two sets with final scores of 16–25, 21–25 and 21–25.

The opposing Rams posted 51 kills and hit .324 as a team, while Fordham had 31 on a .152 clip. The amount of kills has dropped by at least 10 from most of Fordham’s preseason games, showing just how much more competitive conference play is for them. For example, their 3–0 sweep of St. Francis of Brooklyn showcased 46 kills for the team, at a .366 clip.

Senior middle blocker Claire O’Neil led the offense with a .500 hit percentage on six attacks, even though she only played two sets.

O’Neill had this to say about the weekend: “I think this past weekend has proved that we can compete to win the A-10. We have a lot to work on but we know we can compete against top two teams like VCU.” Fordham’s comeback in the final two sets shows that can be the case, even though it ended in a defeat.

The following day, despite coming much closer in key statistics, the squad once again dropped the first set, yet managed to win the third, going 17–25, 20–25, 25–20 and 21–25 against Davidson. The two sides had a near-even number of errors and blocks, but the Wildcats were just a bit more effective on the offensive end.

O’Neill continues, “Although the weekend didn’t go how we had hoped, we have a new competitive drive to prove to the conference that FUVB can win, which we will bring to the game versus SLU this weekend.”

Teammate and setter Megan Brzozowski added: “This weekend was a challenge for us mentally in the best way possible. Starting conference is always exciting and sometimes nerve-racking. I think the preseason really showed us what we are capable of and lead us in the trajectory that we want to go in.” She added, “Even though we didn’t do as well as we hoped, this is another challenge for us to overcome and learn from. I think the conference jitters are out of the way and we are all really focused on being the best teammates and players we can be for one another. St. Louis has always been a very solid team so it’s going to be a lot of fun to see how we have grown from this weekend and fight for this win.”

The Fordham Rams have a nice break now to restrategize before facing Saint Louis University on Saturday, Oct. 2 at 8 p.m. on the road as they look to put these first two losses past them.