Fordham Football opened Patriot League play with a thrilling 42–41 victory over Lafayette, capped off by a game-winning run from Tim DeMorat. 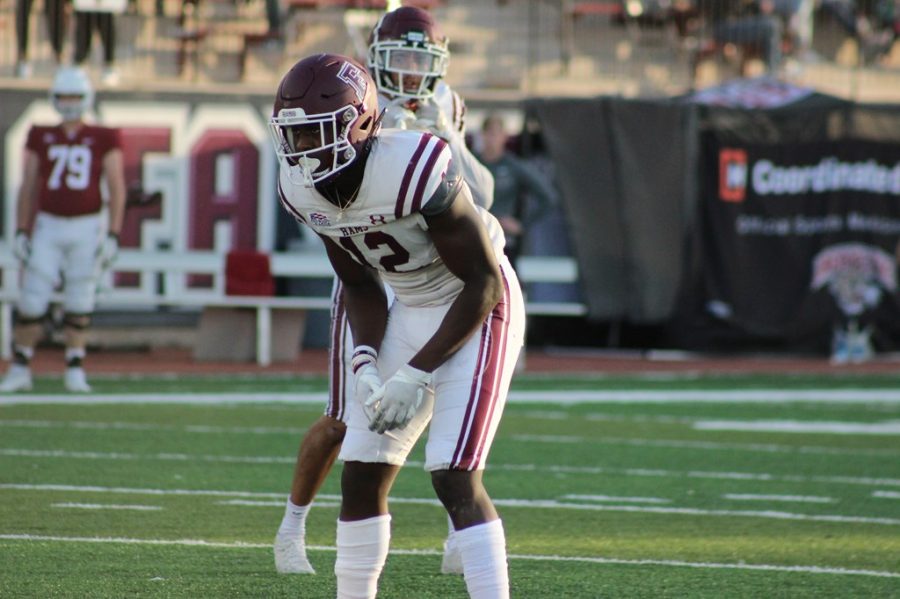 Fordham's defense held on just long enough for the offense to put away the Leopards to start conference competition. (Courtesy of Fordham Athletics)

Fordham Football had a brutally tough non-conference schedule to begin 2021, with losses to Football Bowl Subdivision (FBS) opponents University of Nebraska and Florida Atlantic University that left them 1–3 to begin their season. However, the upside of this start to the season is that by the time conference play began, they were battle-tested and ready to dive in.

The maroon and white played their first game of the Patriot League season Saturday against Lafayette College at Fisher Stadium in Easton, Pennsylvania and pulled out a decisive 42–41 victory within the final 30 seconds. Senior quarterback Tim DeMorat was the hero of the afternoon, rushing the ball from the Lafayette two-yard line into the end zone for the game-winning touchdown and adding another outstanding moment to his already illustrious Fordham career. Fordham then stopped an attempted Hail Mary pass by the Leopards to secure the lead as the final whistle sounded.

The victory is the second in two weeks for the Rams and concludes a five-game stretch to start the season that featured four road games, including the past three. It puts them at 1–0 in the Patriot League and 2–3 overall.

DeMorat led the way by throwing for 305 yards, throwing a touchdown pass and then running in the aforementioned game-winner. This was the sixth game of DeMorat’s career in which he threw for at least 300 yards. The team collectively had a season-high in offensive yardage, with 519.

Defensively, the Rams recorded four sacks and stopped five third down conversions. Senior linebacker Ryan Greenhagen had recorded nine tackles on Saturday and was well on his way to recording double-digit tackles for a fifth consecutive game when he injured himself on the second half kickoff, thus pulling him from the remainder of the game.

While the Rams only held possession of the ball for a total of 24:45, they made the most of the time they were on offense, especially in the first quarter. On the opening drive of the afternoon, Fordham brought the ball from its own 27-yard line into the Leopards’ end zone in just four plays, completed by a four-yard touchdown run by fifth-year running back Trey Sneed.

That score was the first of two in the game for Sneed, who was seeing his first playing time of the year. Along with the two touchdowns, Sneed had 147 rushing yards on 23 carries.

On the very next possession, the Rams got things done quickly again. Fordham junior running back Trey Wilson ran into the end zone to record another Fordham touchdown, completing a nine play, 74-yard drive that began back at the Lafayette 24-yard line. Fordham needed only 5:10 with the football on its first two drives to make the game 14–0 and give the Leopards a huge deficit to overcome for the remainder.

However, Lafayette responded on its next drive and made a rather big splash. Leopards’ wide receiver Julius Young caught a 46-yard pass from quarterback Ah-Shaun Davis, completing a drive that started on their four-yard line to make the score 14–7 in favor of Fordham.

Luckily, the Rams were able to tack on a third touchdown before the opening quarter came to a close. Fordham junior receiver Garrett Cody caught DeMorat’s lone touchdown pass of the day, good for 14 yards.

By the time the first quarter was over, the Rams had a commanding 21–7 advantage.

However, when the squads switched sides for the second quarter, the Leopards took complete control of the game and made up that deficit.

Lafayette scored two touchdowns in the quarter on two separate one-yard runs, one from Selwyn Simpson and another from Ty Hranicka. At halftime, the game was tied at 21.

The Leopards actually got on the board first in the second half. On the second play of the opening drive, Lafayette receiver K.J. Rodgers went 74 yards with a reception and a venture into the end zone, giving his team its first lead of the day, 28–21.

Fordham recorded a total of five points in the third quarter on a safety forced by graduate defensive lineman Deondre Carter and a field goal from senior kicker Nick Leinenweber. Lafayette put up another touchdown after a four-yard run by Davis that made the score 35–26 heading into the fourth.

The Rams put up 10 more points on their first two possessions of the final quarter after Sneed’s second score of the day and another field goal from Leinenweber. That gave Fordham a 36–35 lead before the Leopards’ Michael Hayes ran for three yards into the end zone to make the score 41–36. A failed two point conversion kept the score stagnant.

It came down to the final drive. That was when DeMorat ran the ball in for a touchdown with 28 seconds left to play to give Fordham a one-point lead.

After that came the failed Hail Mary pass for Lafayette, and then, suddenly, the game was over and Fordham had the win, 42–41.

“Obviously, [it was] a heck of a finish,” Rams’ head coach Joe Conlin reported to Fordham Athletics immediately after the game. “We started out great on offense, [and] defensively we came up big at the end … The guys played hard, and they finished the game in the fourth quarter, which is all you can ask.”

Now, the Rams, with a win under their belts in Patriot League play, will prepare for their upcoming game against non-conference opponent Wagner College at Jack Coffey Field on Saturday. The game will be a part of the annual Homecoming festivities for the University.

The Patriot League season is underway, and the Fordham Rams look ready.