Football Wins Sixth in a Row, Sets Up Meeting with Holy Cross

Looking like a refueled team out of the bye week and led by a vintage Zach Davis performance, Fordham Football rolled past Georgetown and can finally shift its attention toward a Patriot League Championship-deciding game against Holy Cross. 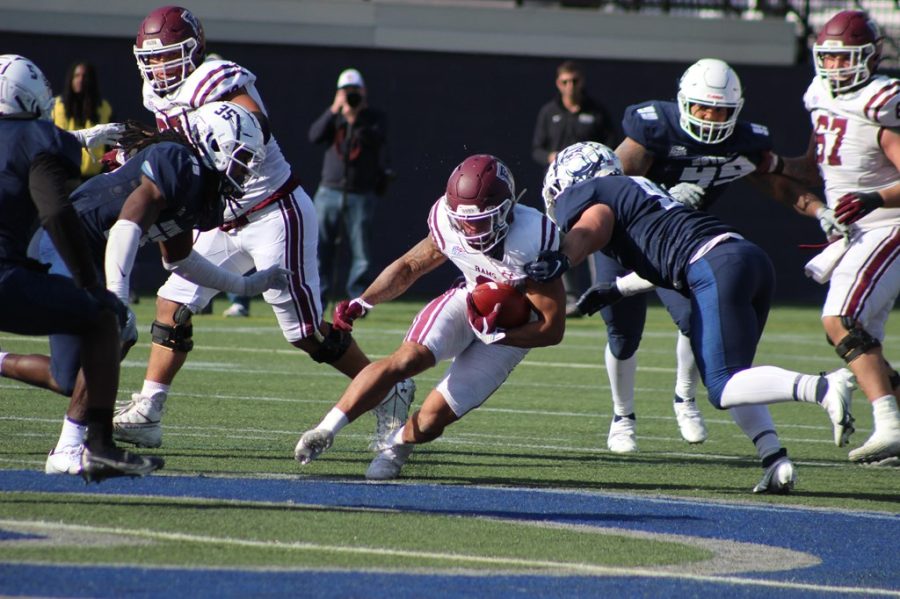 Davis was an effective threat both on the ground and through the air to put together his best individual performance arguably since two seasons ago against the Hoyas. (Courtesy of Fordham Athletics)

Ever since Fordham Football began winning in the Patriot League, all eyes have been pointed toward a Nov. 16 battle with the College of the Holy Cross. It was pitted to be a fight between one and two in the preseason polls with the conference title on the line.

With that, it would have been very easy for both teams to look beyond the challenges in front of them. For Fordham though, that did not appear to be the case. It produced a pair of resounding blowouts to Wagner College and Bucknell University, scoring a combined 122 points across the two, garnering nearly every Patriot League weekly honor in the book and dominating the conference’s statistical categories.

However, with all the distractions of Family Weekend on Oct. 23, Fordham showed its first signs of looking a bit too far in the future, as it pulled out a squeaky 35–28 victory over a winless, then touchdown-less Lehigh University. It was not pretty, with the Rams needing the Mountain Hawks to fumble every missed opportunity they had in order to give Fordham a fighting chance to win.

However, good teams find a way to win the games when they are not at their best. Fordham did just that, seizing the chance in front of them with 21 unanswered points. Then, they received something they desperately needed, a bye week after eight straight weeks of football, to refuel, refresh and gear up for Georgetown University.

And this time, Fordham did not make the same mistake, coming in with a clear game plan and overpowering the Hoyas en route to a 41–20 victory at Cooper Field in Washington D.C., their sixth in a row to move to 6–3 on the season and a perfect 4–0 in Patriot League play.

Georgetown is, somewhat surprisingly, the Rams’ most familiar opponent, as this meeting represented the 67th between the two squads, with Fordham leading the all-time series 40–23–3, taking the most recent matchup 30–27 two seasons ago on Oct. 19. Two seasons because the Hoyas were the only Patriot League team to miss the conference’s spring campaign.

This game, however, felt as familiar as ever, especially for Fordham. In one unfortunate way, Georgetown, like Lehigh, rolled right down the field on its opening drive thanks to a surprising quarterback change. From there, the Fordham offense that rose to the top of the conference made its return, as the Rams crossed the 500-yard threshold en route to 34 points through three quarters, putting this contest well out of reach before a pair of late touchdowns in the fourth with the reserves on the field.

At first glance, 500 may not sound like much of a surprising number for this Fordham team. But rather than the career-high 401 yards, senior Tim DeMorat dished out against Lehigh, this time, the yards came from the rushing attack just as much as the air. Head coach Joe Conlin always sees the running game as a priority.After just 87 yards on the ground two weeks ago, it certainly became more of one this time around, with 230, 103 of which came from graduate student Zach Davis.

Davis, the Rams’ leading rusher in 2019, had not looked quite right since returning from injury this season. But, thanks to rehab during the bye week, Davis was an entirely different player, rushing with an aggressive attitude and north-south approach reminiscent of his old self, punching in two touchdowns as well, fitting that the last time Davis hit that mark came on Oct. 12, 2019, against those same Hoyas.

Accompanying him was 76 yards from junior Trey Wilson II and even 39 courtesy of DeMorat, utilizing the legs that Conlin hopes he does when the opportunity is there. And, alongside the terrific production Fordham received on the ground came familiar numbers in the aerial attack. DeMorat finished 22–38 with 273 yards and three touchdowns, again leaving a zero in the interceptions category, as he has not thrown one throughout conference play, the last coming Sept. 18 against Florida Atlantic University.

On the receiving end of those completions were senior Fotis Kokosioulis, catching five balls for 91 yards and two touchdowns as he remains atop the friendly battle for the top of the Patriot League in the latter category with junior teammate Dequece Carter, who added four catches for 46 yards and a touchdown himself. Matching those numbers without the endzone strike was junior MJ Wright. Davis added four himself from the backfield to contribute to all facets of the offense.

The offensive output could be expected for Fordham, but the most significant area of improvement came on defense. And from that first drive onward, it delivered, keeping the Hoyas off the scoreboard for two consecutive quarters.

Leading the way in that effort was fifth-year defensive back Jesse Bramble, flying all over the field with six tackles and an interception. Junior Stephen Williams pursued six of his own while freshman James Conway, even on what could be considered a down week for him with just six tackles, half for loss, notched his fifth Patriot League Rookie of the Week honors. The Rams’ were also active in the pass coverage as well, with a number of pass breakups, two of which came from sophomore Brandon Spencer.

Fordham has received this mix of offensive and defensive success at multiple points this season. However, it is one of the first times that the offense featured such a delicate mix in the run and pass game. The Rams certainly still have key things to improve upon, such as the avoidable penalties and special teams snafus plaguing them from the Lehigh game, but when the offense is meshing like this, they will prove a very difficult team to beat.

All of the waiting, the circling on the calendar and the foresight can finally fade away, and Fordham can turn the page to the team they’ve been waiting for, Holy Cross. Senior Day is this Saturday, Nov. 13 at 1 p.m., and the Rams have much more at stake. The season can already be considered a success, but if they hope to make it something much more, a win this Saturday is a necessity. And, fortunately for Fordham, they look to have their best football yet in store for it.