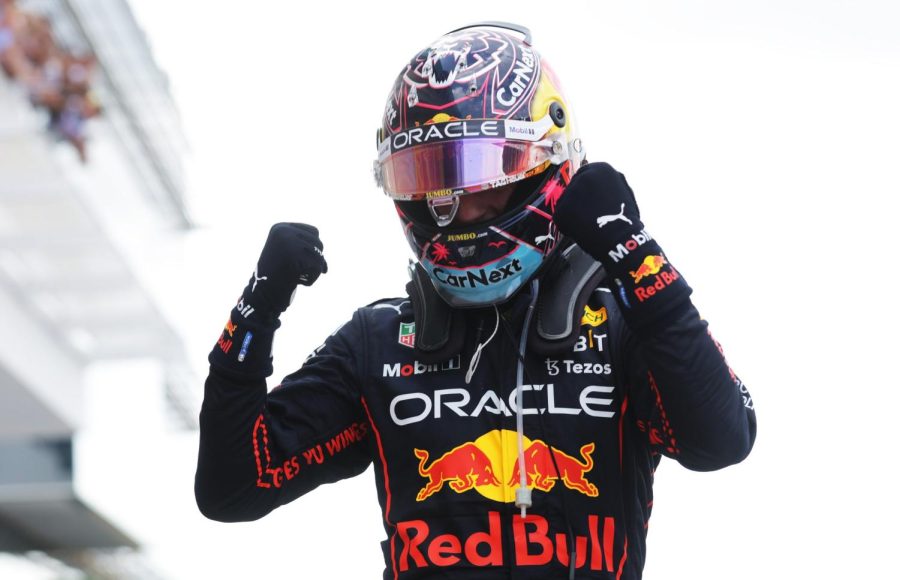 Max Verstappen came out on top in Miami. (Courtesy of Twitter)

Last week, Formula 1 made history as they headed to the United States for the first-ever Miami Grand Prix. With a brand-new track, comprised of 19 turns and a total distance of 3.3 miles surrounding the Hard Rock Stadium, track time was an absolute necessity for both the teams and drivers so that they could understand the track with the limited time before the race. Ferrari needed to bounce back after having a race to forget at one of their home races in Imola with Red Bull wanting to increase their momentum after winning back in Imola. During practice, Red Bull’s reliability woes continued with an engine problem with reigning champion Max Verstappen’s car. His issues forced him to miss a majority of Friday running, giving him very limited knowledge of the track. Other drivers in trying to get acclimated to the track ended up pushing the limits too far. Alpine’s Esteban Ocon hit the barriers in the final practice on Saturday, destroying the car and forcing him to miss out on qualifying.

When it was time for qualifying, Verstappen’s lack of track time cost him. On his final flying lap, he went off track and had to abort his lap. This allowed the Ferrari pairing of Charles Leclerc and Carlos Sainz to lock out the front row for the prancing horse. This was Ferrari’s first front row lockout in qualifying since the 2019 Mexican Grand Prix. Verstappen lined up in third with his Red Bull teammate in fourth and Red Bull locking out the second row. After Ferrari’s disaster in Imola, this was the perfect way for them to bounce back and capitalize on a rare mistake from Verstappen.

When the lights went out, all of the cars got away cleanly. Verstappen got a slightly better start and was able to get past Sainz as they headed into turn one. Leclerc still held the lead ahead of Verstappen, with Sainz and Perez in third and fourth, respectively. After a few laps, Leclerc and Verstappen were already building a gap to the rest of the pack. On lap eight, we had the first retirement of the race with Zhou Guanyu’s Alfa Romeo entering the pits with a technical issue.

Meanwhile, Verstappen started to reel Leclerc back within range. On lap nine, Verstappen overtook him for the lead of the race. Leclerc made a slight mistake, which gave Verstappen the chance to take the lead. As the race continued, Verstappen was able to build a slight gap, but Leclerc was still on his heels. Meanwhile, Perez was starting to close in on Sainz for third. However on lap 20, Perez was on the radio saying that he had an issue with the engine. It was quickly resolved, but he fell back from Sainz, removing any pressure on the Ferrari driver. On lap 24, Leclerc was the first to blink and pitted for new tires with Verstappen pitting a few laps later on lap 26. Then, Sainz and Perez both pitted on lap 27. After the pit stops, Verstappen remained in the lead ahead of Leclerc with Sainz in third and Perez in fourth.

Then on lap 41, the race was turned on its head when the Virtual Safety Car (VSC) was brought out due to an incident between the McLaren of Lando Norris and the Alpha Tauri of Pierre Gasly. Norris had a rear puncture and had to retire from the race with a lot of debris left on the track. The VSC was quickly updated to a full safety car which bunches the entire grid up, eliminating any and all of the gaps between the cars. The top three decided to stay out on their old tires while Perez pitted onto fresh tires. He was able to stay in fourth, giving him a huge advantage when the race would restart.

On lap 47, the safety car was brought in and the green flag was shown, bringing the cars back to racing speed. Like at the start of the race, Verstappen and Leclerc were able to immediately build a gap to the rest of the cars. Meanwhile, Perez was using his tire advantage to stay close to Sainz. On lap 52, Perez tried to pass Sainz heading into turn one. Unfortunately, Perez outbroke himself, letting Sainz go to the inside and keep that final podium spot.

After 57 laps, Verstappen crossed the finish line to win the first ever Miami Grand Prix, with Leclerc in second and Sainz rounding out the podium with Perez just behind in fourth. With this win, Verstappen once again cut into Leclerc’s lead in the Drivers’ standings while Red Bull also cut into Ferrari’s lead in the Constructors’ standings. You can take a look at the full standings here.

After five rounds, the momentum is definitely with Red Bull, having won the past two races somewhat convincingly. The next race is this weekend at the circuit Barcelona-Catalunya for the Spanish Grand Prix which is Sainz’s home race. He, alongside Ferrari, will want to perform well to recover some momentum. Both Red Bull and Ferrari are expected to bring upgrades this weekend to help increase the performances of their cars. Based on how this season has fared with the new regulations, expect another good race as Formula 1 continues its journey into a new era.