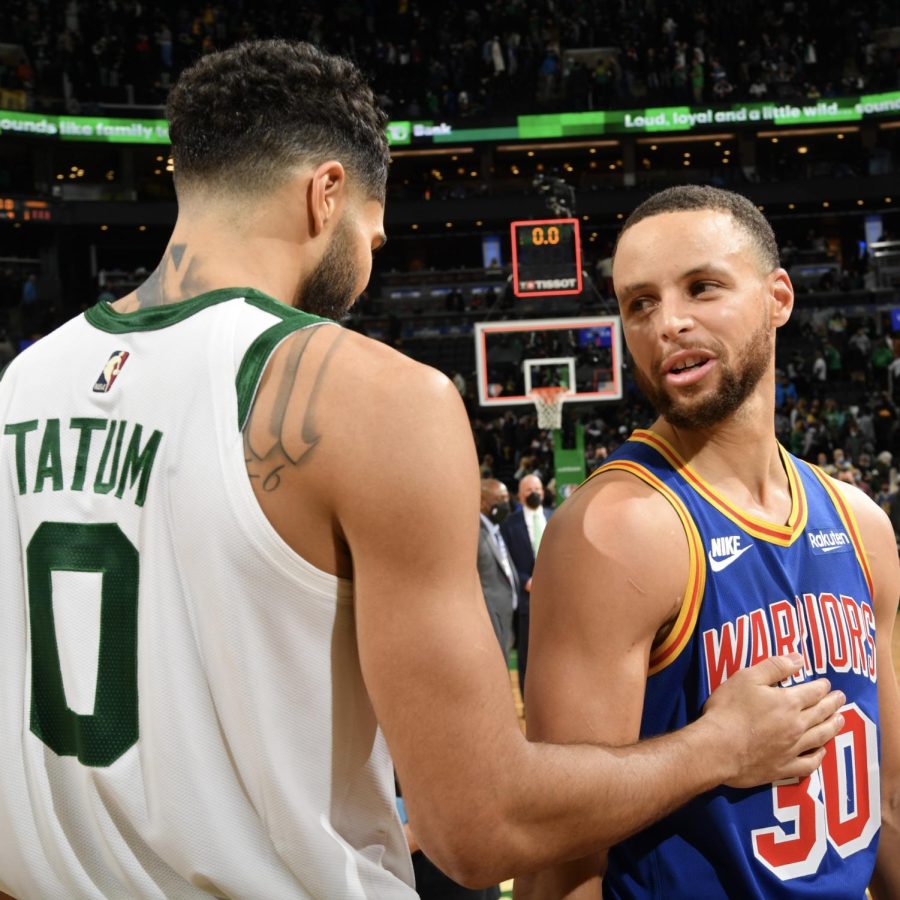 The Warriors and Celtics are set to battle it out for a championship. (Courtesy of Twitter)

Patience is a virtue that very few possess. Some of the most successful people proudly claim they are impatient, while others assert the key to their good fortune has been an ability to stay the course, exercise patience and wait for their opportunity to shine. It is the latter mentality that best reflects the teams that will battle in the 2022 NBA Finals. Both the Boston Celtics and Golden State Warriors have faced unique challenges on their road to the Finals that required patience from players and fans alike. Luckily, for all involved, the onerous wait is over and The Larry O’Brien Trophy is only four wins away.

As far as recent history is concerned, it appears that the Warriors have not had to be particularly “patient.” They brought home titles in 2015, 2017, and 2018 with Finals appearances coming in 2016 and 2019 as well. However, before the 2015 Finals, the Warriors last trip came in 1975. Even after winning back to back championships, the team dealt with injuries that ultimately derailed their bid for a 2019 championship against the Toronto Raptors. Since that loss, the Dubs lost Kevin Durant to free agency and have continually struggled to keep the star-studded trio of Stephen Curry, Klay Thompson and Draymond Green on the court. They missed the playoffs in 2020 and were dispatched during the play-in phase of last season’s dance. They have had to remain patient, understanding that a potential run at yet another championship would only come with a clean bill of health and improved performances from younger role players.

Things improved in the 2021-22 regular season. Despite nagging injuries that came and went at various times, they finished with a record of 53-29, had the association’s second-best defensive rating and boasted the third-most effective field goal percentage. The core of Green, Curry and Thompson stayed healthy enough to continue at different moments, with the Dubs also benefiting from the emergence of third-year guard Jordan Poole. The youngster had a sensational offensive year. He averaged 18.5 points, 3.4 boards and shot a deadly 92.1 percent from the charity stripe. Poole, along with the likes of Andrew Wiggins, Gary Payton II and Otto Porter Jr., helped the Warriors stay competitive on both ends of the court while the stars got healthy. Coach Steve Kerr kept the team on track and helped guide them to the number 2 seed.

From there, Golden State’s playoff run would be relatively uneventful. They defeated Nikola Jokic and the Denver Nuggets in a gentleman’s sweep in the first round. Their Conference Semifinal series against the Memphis Grizzlies was more competitive, but an ailing Ja Morant was only able to play three of the six games, making the Warrior’s path that much easier. In many ways, the Western Conference Finals bout with Luka Doncic and the Dallas Mavericks perfectly illustrated why the Bay’s best have been so lethal this year. All series long, it was clear that Doncic did not have competent help. On the other hand, Curry and his crew were able to move the ball with ease on offense and establish defensive dominance. The Warriors shot 51.3% from the field and outrebounded Dallas by an average of roughly 11 boards. Curry averaged 23.8 points, 6.6 rebounds, 7.4 assists and took home the brand new “Magic Johnson” Award as the WCF MVP for his efforts. When all was said and done, it was clear to all that Golden State’s trio was not taking their latest trip to the Finals for granted.

The Boston Celtics and their fans have a reputation for impatience. As a franchise, they’ve collected 17 championships and hold a storied history written by names such as Bird, Russell, Cousy and Pierce. However, the C’s last title came in 2008. The 14 years since have seen some solid arrangements, but none skilled enough to hang banner number eighteen. The past few years have provided hope thanks to the combined ability of Marcus Smart, Jaylen Brown and Jayson Tatum. Boston has reached the playoffs each year since 2015, and made four appearances in the Eastern Conference Finals in that time span. However, they were not able to advance to the Finals, and the frustration came to a boiling point last season when the Brooklyn Nets kicked them out of the first round in what was a five game series. The shellacking caused many to wonder if Brown and Tatum could co-exist, and if the front office actually had a clear vision for the future.

Summer saw change. Former Coach Brad Stevens moved upstairs and became the President of Basketball Operations and Ime Udoka was brought in as the new man on the sideline. Personnel wise, Al Horford returned after brief stints in Philadelphia and Oklahoma City, and the team’s stars remained in place. The first half of the season was brutal. They only picked up the slack just before the All-Star break, and were certainly helped by the deadline additions of Derrick White and Daniel Theis. It was here that coach Udoka’s defensive strategy blossomed, and the eventual DPOY Marcus Smart was empowered to be a primetime performer. Role players, such as Grant Williams and Payton Pritchard, provided depth on both ends of the court and allowed the team to keep a physical presence while center Robert Williams III recovered from a late injury. The Celtics finished the season with a 51-31 record and secured the East’s number two seed.

Their playoff run was thrilling from start to finish. The defense stifled Kevin Durant and Kyrie Irving’s  Nets in four games. Their second and third rounds both went seven games. Round two featured a battle of willpower between Giannis Antetokounmpo and Jayson Tatum. Both players had their ups and downs in the series, but ultimately the C’s would emerge victorious thanks to Tatum’s 27 points per game and relentless pursuit of buckets. The Eastern Conference Finals was not clear cut for Boston. They played a battered and bruised Miami Heat team and struggled throughout the duel. However, they were able to win in seven due to their commitment on the defensive end and Miami’s lack of truly healthy athletes down the stretch. Jayson Tatum averaged 25 points, 8.3 rebounds, 5.6 assists and  took home the “Larry Bird” Award as the MVP of the ECF. The young Boston Celtics’ patience finally paid off and they are certainly ready to come out swinging.

So who takes home the hardware? In my mind, this series will come down to the teams’ defensive ability. Boston will have their work cut out for them. The Warriors had the highest assist percentage in the NBA this season, meaning they were able to consistently find open shots by passing the ball and cutting towards the basket. Boston has not faced this kind of offense yet. Brooklyn ran an isolation offense for the most part, Milwaukee was carried by Giannis, and Miami was just plain tired. The Warriors have three to four legitimate scoring threats and “luxury role players” that are capable of going off at a moment’s notice. Jordan Poole could be the X-factor.  On the Warriors end, it will be fascinating to see if they are able to handle a potential Marcus Smart outburst. It’s a given that Tatum and Brown will generate the most offense for the C’s, but if Smart gets hot, Kerr and the Dubs will have to make quite a few assignment choices. This makes Smart Boston’s X-factor.

Both sides have talent, but only one has “luxury role players” and the kind of pedigree that can make adjustments on the fly. The Warriors offense will be too much for Boston. I’ll take the Warriors in six. Further, I’ll pick Stephen Curry to win a Finals MVP at last. With all the choices and changes coach Kerr and Udoka will be forced to make matchup wise, Curry will remain a constant threat that will wreak havoc on the perimeter.