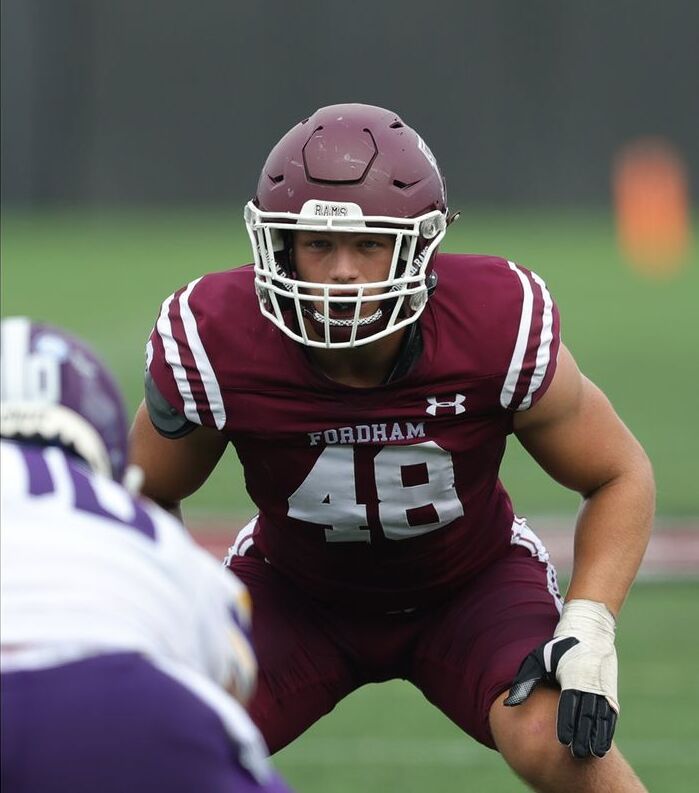 One thing is for certain three games into the 2022 season: Fordham Football sure knows how to play a heart-stopping contest. Just one week after their thrilling 52-49 victory over Monmouth University, the Rams defeated the University at Albany 48-45 on Saturday afternoon in their home opener at Jack Coffey Field. The win pushes Fordham to 3-0 on the season, a perfect start for a team with Patriot League title aspirations.

While 3-0 looks great on paper, Fordham’s flawless record thus far has been anything but easy. In their first two games this season, the Rams went behind early before storming back late to eventually secure the win. Saturday was no different. With the campus full of alumni for homecoming weekend, senior quarterback Tim DeMorat saved the day once again with another outstanding performance. DeMorat completed 33 of 53 passes for 464 yards and five touchdowns.

Fordham got on the board first courtesy of an opening-drive touchdown from DeMorat to freshman tight end Matt Buron, followed by a 38-yard field goal from junior Brandin Peskin, giving the Rams a 10-0 lead after one quarter of play.

In the second quarter, things shifted in Albany’s favor. A one-yard touchdown run from the Great Danes running back, Todd Sibley, got Albany within three. Fordham had an immediate answer for that through senior wide receiver Garrett Cody, who hauled in a 20-yard touchdown from DeMorat to extend the Ram’s lead to 17-7. The rest of the first half belonged to Albany, though. In quick succession, a 75-yard scoring run from Sibley, a field goal and a 45-yard touchdown catch by Sibley with no time remaining gave Albany a 24-17 lead heading into the locker room.

After the game, Fordham head coach Joe Conlin discussed his halftime message to his team. “I just said we’re not playing our brand of football. I said I think we’re the more talented team … but the team that plays the best is going to win the football game and that wasn’t us in the first half. If we want any shot, we have to play better for the next 30 minutes.”

This message didn’t immediately resonate with the Rams, as Fordham continued to struggle into the third quarter. Another touchdown run from Sibley and a 25-yard scoring strike from Albany quarterback Reese Poffenbarger to Julian Hicks extended the Great Danes lead to 38-27 entering the final quarter of play.

Down by 11 with 15 minutes to go, Fordham came up huge on both sides of the ball. First, DeMorat hit Cody for a 58-yard score to pull Fordham within five. A big defensive stop forced Albany to punt, giving the ball back to DeMorat and the offense. In no time, sophomore tight end Jaden Allen hauled in a 19-yard score to put Fordham on top 41-38 for the first time since the second quarter.

With over nine minutes still to play, Albany had plenty of time to find a response. They did just that through a Brevin Easton touchdown catch on the ensuing possession, giving the Great Danes the lead again. But just as Fordham’s lead evaporated almost instantly, Albany’s would do the same. Graduate student running back Trey Sneed took over on Fordham’s next possession, rushing for 41 yards including the game-winning seven-yard score with under five minutes to go.

Although they allowed 527 yards of total offense on the day, Fordham’s defense shook off what has been a rough beginning to the season and delivered a clutch fourth down stop courtesy of excellent pressure off a blitz from senior defensive back Stephen Williams II. A first down from the Fordham offense then iced the game, delivering the Rams a thrilling 48-45 victory.

On the play of his defense, Conlin said, “I thought we did pretty well against the run except for the two touchdown runs. Sibley’s a good back … the kids fought. We’ve just got to do a better job of getting guys to the football and getting guys down.” In terms of passing defense, Conlin believes his team will improve as the season goes on. “They threw for 412 [yards]. Obviously it’s frustrating because we have guys right there fighting their tails off and we’re not doing a good enough job finishing through the hands and getting balls out downfield.”

Sophomore linebacker James Conway had a great day despite the huge totals from the Albany offense. Conway registered 15 total tackles and was named the GEICO Patriot League Defensive Player of the Week for his efforts.

On offense, there’s not much more that can be said about the play of DeMorat and this entire Fordham unit. DeMorat currently leads the NCAA Division I Football Championship Subdivision (FCS) in passing yards and passing touchdowns. As a whole, Fordham leads the FCS in total offense. Cody led the Fordham receivers with 123 yards and two touchdowns, followed closely by senior MJ Wright with 99 yards and a score.

Speaking on the nature of these close, high-scoring games to begin the season, DeMorat said “We love to be in those close games on offense when you have the ball with a chance to go down and win the game … I trust all my guys. Offensive line played great, receivers came up big … I was just doing my job trying to give them the ball and let my running backs go to work too.”

At 3-0 for the first time since 2013, Fordham travels to Athens, Ohio for a tough matchup against a Football Bowl Subdivision (FBS) opponent in Ohio University. That game is at 2 PM on Saturday and can be streamed live on ESPN+ or listened to on WFUV 90.7 FM. The following week, Fordham returns home to open their Patriot League schedule against Georgetown University.